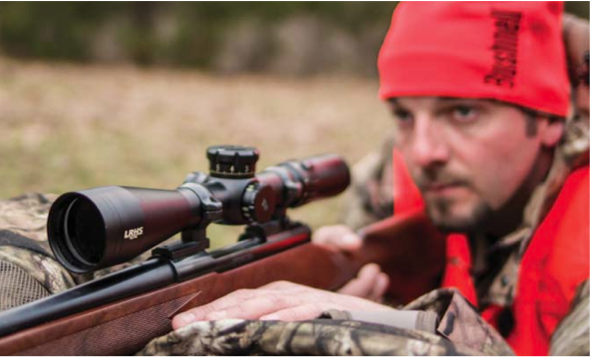 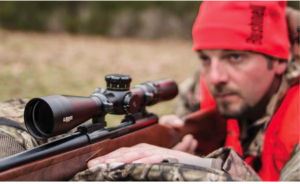 Getting the most from your rifle and scope doesn’t always mean you have to punch a single hole or cloverleafs in the target. Doing that is fun, though, especially if you’re a diehard accuracy enthusiast.

My dad and uncle were both clustering their bullet holes into tiny groups on a paper target 100 yards away. Half of their holes touched each other. My groups looked like a Swiss cheese pattern. It was sheer random luck when one bullet punched through near another. We were all shooting bullets my uncle had handloaded, at the same distance with the same sandbags supporting our shooting irons. I was embarrassed, especially since I knew the .222 Rem. is well known to be an accurate cartridge.

I learned something at that picnic table. Unfortunately, it was something that wasn’t true. I thought it was important — nearly essential — to shoot tiny groups of roughly 1 inch when sighting-in for deer. So I thought my chances of hitting a deer were slim compared to theirs. My dad told me that was nonsense, but I thought he was simply trying to boost my self-confidence.

WHY DEER HUNTERS DON’T NEED TINY GROUPS
Dad was right. Many people today think if a deer rifle doesn’t shoot 1-inch groups, you might as well dump it on some unsuspecting nimrod. And rifle manufacturers sometimes capitalize on hunt- ers’ insecurities by advertising dramatic accuracy claims. “Minute-of-angle,” they say, and it’s probably true. But you rarely need that kind of precision in the deer woods. (Mathematically, minute-of-angle, or MOA, is exactly 1.047 inches at 100 yards. Most shooters round it down to 1 inch.)

Don’t get me wrong. I like a rifle that shoots minute-of-angle, but if that’s what’s necessary then why isn’t every deer rifle a bolt action? Bolt actions are known for accuracy. That’s why snipers use them. But those New England deer hunters who track big bucks while carrying a Remington 760 pump are at no disadvantage even if those pump rifles don’t cluster their bullets into a little cloverleaf pattern. Nor are the masses of hunters who still use Winchester or Marlin lever guns. And lots of states limit hunters to using slug guns. If MOA accuracy was really necessary, all of those hunters would be singing the blues.

WATCH: 4 Things to Look For in a Deer Hunting Riflescope

REAL-WORLD ACCURACY
You don’t need a deer rifle (or a slug gun) that delivers every bullet to a 1-inch dot at 100 yards. Here’s why.

The biggest lethal target on a deer is its chest cavity. We call it the “boiler room” because it contains the heart and lungs. A conservative estimate of its size is 10 inches in diameter. It’s actually a little larger if you extend it to the high shoulder and a couple of inches farther back to include the liver. A rifle that shoots 3-inch groups, or even 4-inch groups, will certainly deliver a bullet to that large target, giving you a one-shot kill.

The truth is, any rifle with sufficient power to kill a deer fired by any shooter who can put shots from that rifle into a paper dessert plate has what it takes to hit a deer in the vitals.

Besides, shooting conditions vary when shooting at a deer. They vary a lot. Shooting from a dead-solid rest does not demonstrate your shooting ability at a live target when you’re resting the gun on your knee, or against the side of a tree, or on a limb. Or maybe you’ll be shooting offhand. And the deer might be moving.

WHY YOU WON’T SHOOT 1-INCH GROUPS IN THE FIELD
Consistent shooting at a paper target from the bench is one thing. Shooting at live game is altogether different, so let’s break down a real in-the-field shot.

1. As soon as you spot antlers those glands sitting atop your kidneys will mainline adrenaline directly into your bloodstream. That stimulant will cause you to forget the conscious steps you took at the rifle range.

2. The wind is blowing. You were conscious of it as you looked for deer, but now that it’s time to shoot you probably aren’t concentrating on whether it’s blowing left, right or some other direction.

3. Maybe you sighted-in on a day when the temperature was 85 degrees, but now it’s 25. That loss of 60 degrees in temperature will mean the velocity of your bullet will be slower. It might make a difference on a long shot.

4. You sighted-in your rifle while wearing ear protection, and maybe even had a cushion between the buttstock and your shoulder because you’re sensitive to recoil. Few hunters notice recoil when shooting at game, but they worry about recoil, and worrying might cause you to flinch.

5. At the bench, you had all of the time you needed to squeeze off each shot. Now you might have only a second or two, maybe less. You’re not relaxed, and you’re not concentrating on keeping your eye in the center of the scope. Instead of looking at a clear bull’s-eye dot that won’t move unless an earthquake hits, you’re looking at a brown deer against brown leaves, and it’s partially obscured by trees. Your anxiety is heightened — you need to be aware of what’s beyond the deer and you know the deer won’t stand still for long. Or maybe it’s moving.

6. Other unpredictables can come into play and they can make the outcome of shooting at game uncertain. Maybe there’s fog on your glasses or raindrops on your scope. Maybe you’re wearing a glove that keeps your finger from feeling the creep in your trigger.

Maybe you missed a shot yesterday and you have a nagging feeling that your camp buddies will tease you if you miss again. Or maybe you’re looking at a buck that’s big enough to turn your legs to jelly. 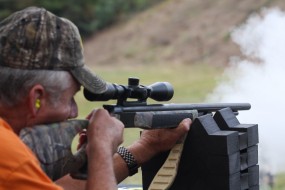 Practice during the off-season, test different powder and bullet combinations, make any changes, and then be ready for the season.

It means two things. First, as hunters we value equipment that won’t let us down, so it’s an expression of absolute confidence in a rifle. Second, as humans we know we don’t always measure up, so it’s a way of saying the rifle is more reliable than the shooter. In other words, machines can perform almost flawlessly; humans can’t. A running back might zig when he should zag. A basketball player might commit a foul when the opposing player attempts a game- winning shot. Likewise, a hunter might make any number of mistakes that reduce his MOA rifle to irrelevance. That’s especially true when the hunter carrying the rifle hasn’t picked it up since last deer season.

Whether you have a MOA rifle, you need to do your part. If you can’t achieve that MOA accuracy, you can still hit a deer if your bullets hit comfortably inside a 6-inch paper plate every time at 100 yards. That’s enough accuracy because most shots at deer will be well under 100 yards. Yes, it never hurts to strive for tighter groups, but whatever the rifle’s built- in accuracy, realize you need to take advantage of it. So shoot a lot. Shoot enough to make shooting become second nature. Here’s how — five things that must happen for you to “do your part.”

Sighting-in — You need to know your rifle, and that means knowing where your bullets go when you pull the trigger. If you have no idea where your bullets are going, you can’t shoot with confidence. And if they are splattering all over the target, some- thing is probably loose — the stock screws, the scope mount, maybe even the crosshairs in the scope. Find it and fix it. 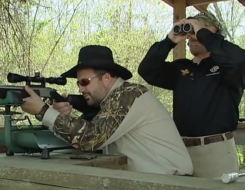 Sighting in a rifle scope or open sights is absolutely critical to ensure success and is part of being an ethical hunter.

Target acquisition — Can you find the deer in your scope? If you can’t, maybe your magnification is too high. Maybe you are left-eye dominant and you’re looking through the scope with your right eye. Maybe you tend to point the gun to the right or the left as you bring it up. You won’t tag many deer if you take three or four seconds to find them in the scope. Practice acquiring the target by picking out several objects, maybe a rock and a stump and a knot on a tree limb. Make sure your rifle is unloaded, and raise and lower it to practice finding them one after the other instantly in the scope.

Gun stability — If you’re middle-age or older, you’re probably not in as good of shape as you once were. If you’re out of breath, you can’t hold the rifle still no matter how young and strong you are. If the deer is way out yonder, but you’re comfortable only with shorter distances, you’ll have a problem. You will never hit a deer if you’re waving your rifle around like a flag on a windy day. So, find a shoot- ing rest, maybe a tree limb, or maybe invest in a good set of shooting sticks.

Trigger squeeze — Many rifles have heavy triggers, and as you apply pressure the business end of the rifle begins to move. A bad trigger — whether it’s heavy, or has some serious creep, or breaks unpredictably — has an enormous negative impact on accuracy. If your trigger causes 1⁄4-inch of movement at the end of the barrel, that’s more than enough to miss a deer at 100 yards. Knowing your rifle means knowing your trigger. If you think your trigger is defective, take it to a competent gunsmith and have him check it out. Ask to feel other triggers with various pull weights to find out what you’re comfortable with. And if you need to spend a little money to get a smooth trigger with a clean break, you’ll never be sorry.

Breath control — Breathe in. Breathe out. Breathe in. Breathe out. When will you pull the trigger? After you’ve breathed in, let just a little air out and pull the trigger. That’s what you should have been doing at the bench rest when you sighted-in, but it’s easy to forget when shooting at live game. Practice that while dry firing and while picturing a deer in your scope — repetition and visualization helps with the mental aspect of shooting.

Making these five practices habit is more critical than shooting miniscule groups on a paper target. If you do all of these things without thinking about them, you’re doing your part. Then, whether you shoot a MOA rifle or not, you’re odds of rendering the boiler room of any whitetail suddenly and permanently out of order go way up.

— Steve Sorensen is an avid whitetail hunter from Pennsylvania known as “The Everyday Hunter.”