Every time my wife, Nicole, and I set up a stand in a tree or on the ground, we look for ways to make that location the best it can be. We try to enhance each stand location by making sure there are one or more calling cards available to deer.

What is a calling card? It’s some type of object or contrivance that will entice a deer to come close to your stand and offer you a shot. Because we bowhunt so much, we have to get close. A calling card can be natural or man-made, visual or airborne — such as scent. Sometimes, one calling card is all you need. Other times, it might be smart to have several. 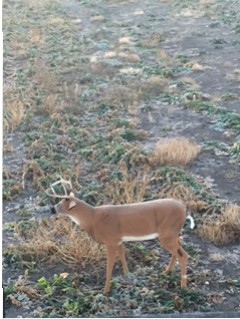 Positioning the decoy in front of your stand in a specific spot can give you a better shooting opportunity.

There are many examples of calling cards: waterholes, rubs, scrapes, licking branches, small interior food plots, minerals, apple trees and other fruit bearing trees, and decoys. Nicole and I use most of these throughout the season, and we’ve had enough success to know they work.

Using Decoys to Fool Deer
Nicole and I have had great success using decoys in a variety of locations at various times of year. We’ve had good luck in the early season hunting food sources in large fields or food plots. In these situations, it’s sometimes difficult to pinpoint where the deer will be coming out of the woods to feed. They might use one trail one day and another several hundred yards away the next. Even if a buck comes out 200 yards from your stand, a decoy will help draw him in.

We prefer to use a small-bodied decoy with a medium-sized rack. Anything larger might intimidate the buck you are trying to lure in. As soon as a buck comes out and starts feeding within sight of the decoy, I’ll do some soft call- ing to help convince him that the decoy is real. Most bucks don’t charge right in. Instead, they’ll often start feeding slowly toward the decoy. They like to appear disinterested, but don’t be fooled. They know right where that decoy is.

I always make sure my decoy is as scent-free as possible. I used to put out deer scents around the decoy as an attractant, but I don’t any more. I’ve found that scents sometimes alarm incoming bucks. Actually, I’ve learned that the absence of any deer scent seems to draw on a buck’s curiosity more anyway.

For that reason, the positioning of your decoy is critical. I always set up my decoy so that it’s slightly quartering away from my position. That way, I’ll get a shot opportunity when the buck comes in and circles to the rear of the decoy. If the decoy has movable ears, I’ll put the ears back and cock the tail out slightly. I don’t want the decoy to appear alert. Instead, I want it to appear to be posturing.

I’ve made the mistake of setting my decoy out about 20 yards from my stand. That was way too close. Whenever a buck came in and started to circle, he would often walk right under my tree and catch my scent. It’s far better to set the decoy farther out so when the buck comes in and circles to the rear of the decoy, you’ll have a 20- or 25-yard shot.

We seldom use decoys in small interior food plots because of the tight space. But we often use them in larger food plots for the reasons mentioned. Generally, we don’t use decoys as much in situ- ations where a lot of other calling cards are available, except for food, of course. In most cases, we use them in situations where we hope to attract a deer into a specific area to get a shot opportunity.