This is a good time to start the deer hunting game. The weather is not cold anymore than before. Deer are go out so hunters don’t miss this good choice. But before you catch iy,we provide some useful deer hunting tips hope that you will catch it quickly!

1. Keep Scouting
Deer are creatures of habit and never range to far. If you see deer with head gear in a field one night you are likely to see them again. Keep an eye out as you drive around of where you are spotting deer after the rut. These areas are often good places to start your late season deer hunt. Take advantage of the snow that late season brings to much of the country. What better way to see where the deer are moving and bedding the fresh snow.

2. Get Off The Beaten Track
Look for remote or hard to reach locations that did not receive much hunting pressure during the rut and opening part of the hunting season. After a heavy rut bucks are tired and look for these remote, quite locations to rest. Often these locations will be near a good food source as bucks now are trying to put the weight back on that they lost chasing does during the rut.

3.Hunt Early and Hunt Late
Unlike the rut when it’s not uncommon to see a buck running around in the middle of the day post rut sends trophy bucks back to their nocturnal state. Sneak in behind good food sources well before first light and try and set up on trails leading to heavy cover. You may catch one of these old gray ghosts heading for bed in the early morning light. The same stand may be productive right as dusk as the buck emerges from bedding areas for his nightly feedings. 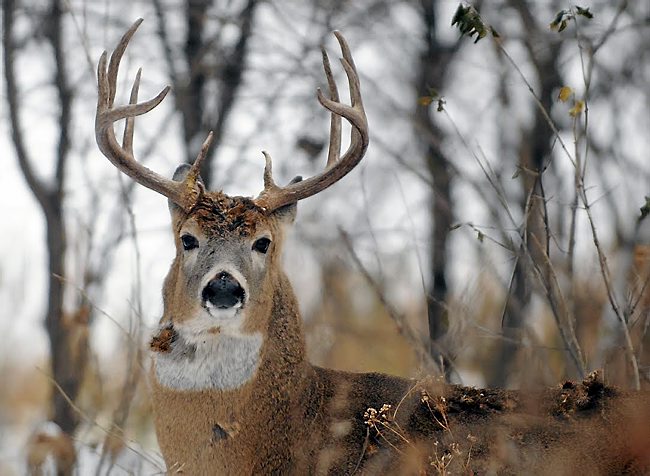 4.Use the same tactics you did for the rut only softer
28 Days after the main rut does not successful breed and sometimes yearling does will often come into heat again, a sort of second rut, after the main rut. For this reason some of the tactics used during the rut such as scents and calling can still work. Bucks are much more cautious now so go easy on the calls and scents but If you aren’t seeing much movement a few soft bleats reinforced by some estrus scent may be enough to get that bedded buck out to take a look. As long as a buck is still carrying it antlers it still has a elevated level of testosterone and will still be responsive to scent and calls but stay away from the tending calls and challenge calls. In my estimation rattling is not very effective post rut either so you can lighten your load by leaving your rattling horns at home when hunting deer during the post rut.

5. Blizzard in the forecast? Get to your stand!
As many experienced hunters can tell you when bad weather is moving in the deer seem to become more active feeding before the storm hits. If your area forecasters are calling for a big storm the day or evening before the front moves in can be a very productive time to hunt. Keep your eyes open for more then one buck. After the rut bucks tend to be more tolerant of each other and especially before a storm you may see groups of deer concentrating around a food source.

6.Try a Deer Drive
Deer drives can be effective post rut if nothing else is working. A fried and I harvested a nice buck a few years ago by walking parallel trails on a christmas tree farm. The trails were about 50 yards apart and we couldn’t see between them but we knew that deer often bedded in between these rows so we each took a row and waked up the trail into the wind stopping every 10 feet or so and standing still. As I reached the end of the row the buck got up from his bead close to me and walked slowly past my waiting friend on the next trail over. As he reached the trail my friend was standing on the buck stopped to look around and my friend was able to drop the buck where he stood. Driving for deer is one of my least favorite things to do, but it can be effective. About the only time I will consider a drive is when I am about done hunting a area for a while. Once you bump the deer out of their natural area it takes them a while to come back and driving all your hunting land can ruin the rest of the days hunt.