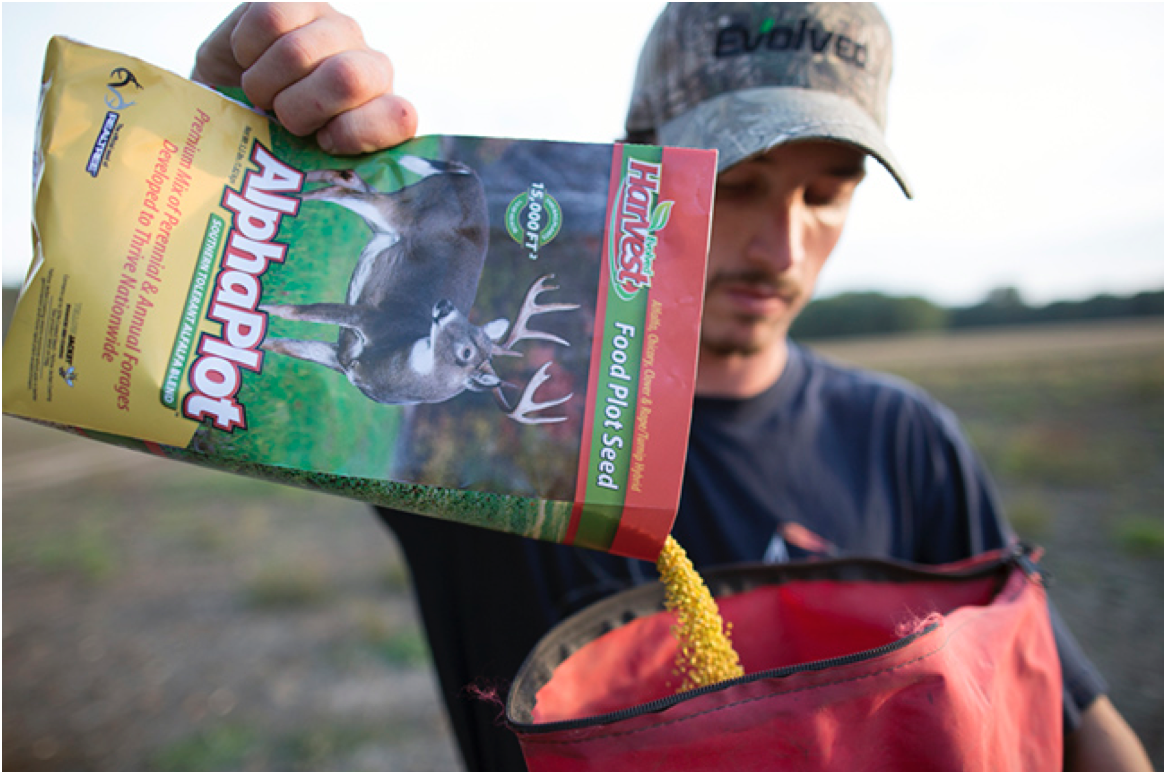 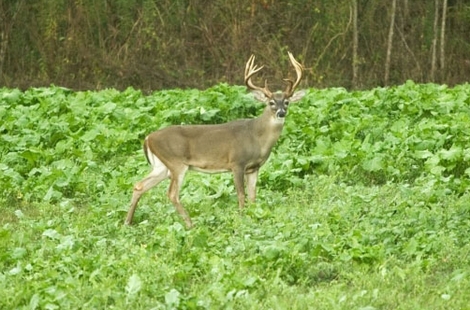 As I walked down the trail enclosed overhead by bare oak branches, I crept past several green fields full of clovers and other growing plants. Farther down the trail, I stop at a secluded brown food plot that appeared to have been abandoned long ago. The lush, green soybeans from summer were now thin-stalked skeletons, with a mix of barely clinging hulls and pods. Several corn stalks, sparsely eared, were mixed into the bean field. I had reached my hunting spot that cold January afternoon.

Although many hunters would have gravitated toward healthier looking plots, that old brown field can be just as productive as it was during hot summer days. While most soybean or corn fields have long been combined by that time of year, many hunters are starting to plant and leave smaller standing fields of traditional crops for hunting and deer nutrition.

But don’t put all your eggs in one basket to maximize your property’s nutrition and hunting potential. You must be diverse.

As crazy as it might seem, a complete food plot program for a property will often resemble a jumbled mess. No matter a property’s size, its food plot strategy must contain a mix of autumn and summer annuals, as well as perennial plantings to enhance overall nutrition and hunting success.

Whether you’re looking to grow and shoot bigger bucks or simply see more deer, it will take more than an everyday green field planted each fall. Most hunters fail to realize the only thing standing between them and a complete food-plot program is a basic understanding of the various types of forages you can plant for deer.

The Tortoise and the Hare
In the classic children’s story The Tortoise and the Hare, the overwhelming favorite to succeed was the quick hare. However, the slow, steady tortoise crossed the finish line first. Where am I going with this? Well, as in the story, food-plot forages usually fall in line with one of the two characters, with a few twists. 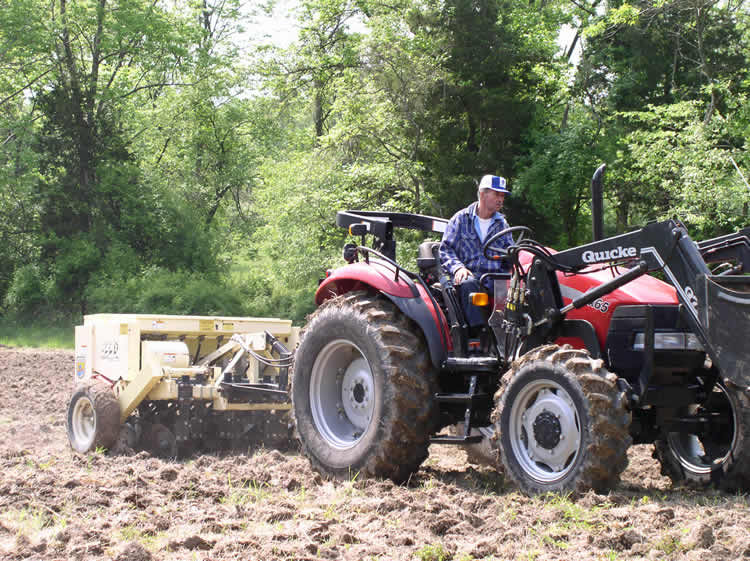 Habitat management should involve a broad spectrum of things that may include food plot management, and consideration for year-round plots.

Like the hare, annual food plot forages grow in quick spurts, providing potentially large amounts of food and nutrition for deer in a brief time (that is, hunting season). By far the most commonly planted food plot type is the cool-season annual, or what most call a hunting plot or green field. Some common cool-season annual plants include oats, wheat, brassicas, rye grain, winter peas and certain clovers, such as crimson or arrowleaf. These plots are typically planted in late summer or early fall to hit peak attractiveness during hunting season. Many hunters even plant them to peak at a specific time during hunting season, such as the rut or late season.

The counterpart to these is the warm-season variety. The most common warm-season annuals are soybeans and corn, but many hunters are beginning to incorporate plants such as lablab, buckwheat, grain sorghum, iron-clay or cow- peas and sunflowers, particularly in mixes.

Most warm-season plots are sowed in mid- to late spring, about the same time as many conventional crops, and provide a high-volume source of nutrition throughout summer. Although production (quantity of food) typically has tailed off during hunting season, those spots still can produce lots of deer sightings.

The tortoise of food plot forages is the perennial. Unlike annuals, perennials tend to be more consistent, slow-and-steady producers. Most never exhibit the giant peak in production like annuals, but they stick around and provide for deer much longer than a cool- or warm- season annual. This persistence of perennial plants is what I like to call filling the gaps. Most perennial food plots earn their keep during the lag between annual plantings.

These lags typically occur during late winter and early spring, and when your fall hunting plots are getting established and summer plots are tailing off. Most perennial deer forages are actually termed cool- season. One exception is sweet clover. Some of the most common are alfalfa, forage chicory and white, or ladino, clovers. Most perennials require more maintenance than annuals, especially to keep their production levels up from year to year.

In the end, The Tortoise and the Hare holds some truth. On a year-round production level, only the perennial — slow, steady tortoise — food plot forages can support a deer’s diet. Neither the cool- nor warm-season annual forages provide adequate nutrition by themselves or together. To create the silver bullet of food plots, your management plan should use all three types of plantings to maximize deer nutrition and hunting success. 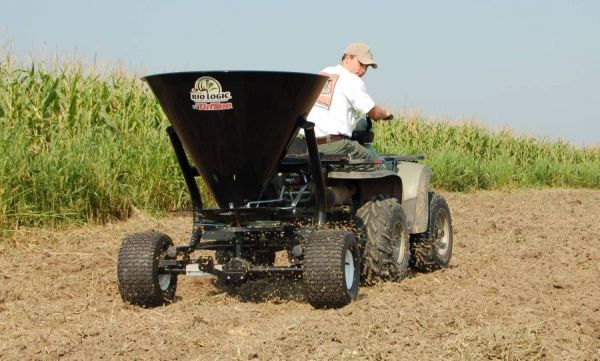 Laying Out the Buffet
Every serious hunter has experienced the ups and downs of deer hunting, particularly with deer sightings. Even as a biologist, it amazes me how I can see 10 or more deer in a food plot consistently one week, but the next week it’s like someone flipped a switch and they are gone.

Several factors can cause this, including hunting pressure and predators, but often it has to do with the stomachs of deer. All food plot forages have a unique set of characteristics. These include timing of peak attractiveness, like when oats and wheat are in a young grass stage, to the high amount of crude protein, such as in actively growing soybeans during summer. The key to maximizing deer nutrition and hunting opportunities is creating a food plot strategy that fulfills the needs of hunters and deer.

Give Them What They Want
You might think, “Is there really a difference between what deer and hunters want? The end goal is to get deer into a plot so they can eat or I can shoot them, right?” Yes. However, this is a lot easier said than done. Food plot forages often peak in attractiveness to deer at various times of year. This affects when deer will eat that forage and what nutrition they will take in, and also when a hunter at that plot might encounter deer.

Let’s look at the brassica family. A lush, green food plot in brassicas, such as kale and rape, looks like a giant deer salad bar. But after plant- ing in early autumn, many hunters will often notice that deer ignore the food plot until late autumn or early winter, when several hard freezes have occurred. Before the freezes, the brassicas consist of a lot of starches. When the plant has been exposed to several hard freezes, the starches change to sugars.

As with humans, those sugars are obviously much more desirable to deer. So if you planted all brassica plots throughout your property, they would likely not see much action until later into hunt- ing season. Although this is still beneficial to deer and hunters, planting other forages — such as oats and wheat — will offer a great early-season hunting spot. Because of their characteristics, I often don’t recommend planting forages such as brassicas in the deep South, where the climate might not let cold temperatures convert the starch to sugar.

Feed the Need
Supporting the nutritional requirements of deer strictly with food plots is impossible. That’s why native habitat management is a must for anyone looking to create a better deer herd and bigger bucks. However, providing high-quality forage via food plots year-round will dramatically decrease nutritional stress, especially during some of the hardest times, such as the post-rut recovery and antler-growing period for bucks, and pregnancy (gestation) and milk production (lactation) for does. But don’t think just planting any food plot will get the job done. You have to play to the nutritional needs of the deer during the time in which the plot will be growing.

An example is during summer, when bucks and does are in an extremely energy-demanding period. The need for high-quality forage, particularly protein, might never be more critical, especially when it comes to growing bigger bucks. Throughout the active grow- ing stage, antlers are made up of close to 80 percent crude protein. The extensive need for adequate protein is never more apparent with bucks.

But what about the does?

How can providing high-quality food to does influence the antlers on bucks? During summer, does
need a lot of quality food to contribute to the growing fawn they are carrying. But the real work starts when the fawn is born. Providing high-quality milk to a fawn is two to three times more taxing on a doe than when she was lugging the fawn around in her belly. Research shows that the quantity and quality of doe milk a buck fawn receives affects his antlers in adulthood, especially his first set. This demonstrates why having high-quality forage available during this period for does will help bucks on your property.

Planting warm-season annuals — soybeans, lablab and cowpeas — will provide bucks and does with the high source of protein they need during this time. Because of the high attractiveness to deer, planting these type of plots on a small scale — less than an acre — can be risky, because deer will browse heavily on the plants immediately after they sprout. However, a balanced food plot strategy for a property should also include perennial plots, with forages such as chicory and white clover, which will be available for deer during this time and should relieve some of the browsing pressure on a new warm-season food plot.

Planning a food plot program to provide deer nutrition and increased hunting opportunities might seem complicated or even confusing. No single forage will meet all the demands of deer or hunters. Creating a balanced strategy using a mixture of cool- and warm-season annuals and some plots in perennial forages, such as white clover, will maximize your hunting opportunities, let your property produce a quality deer herd and let bucks express their antler potential.