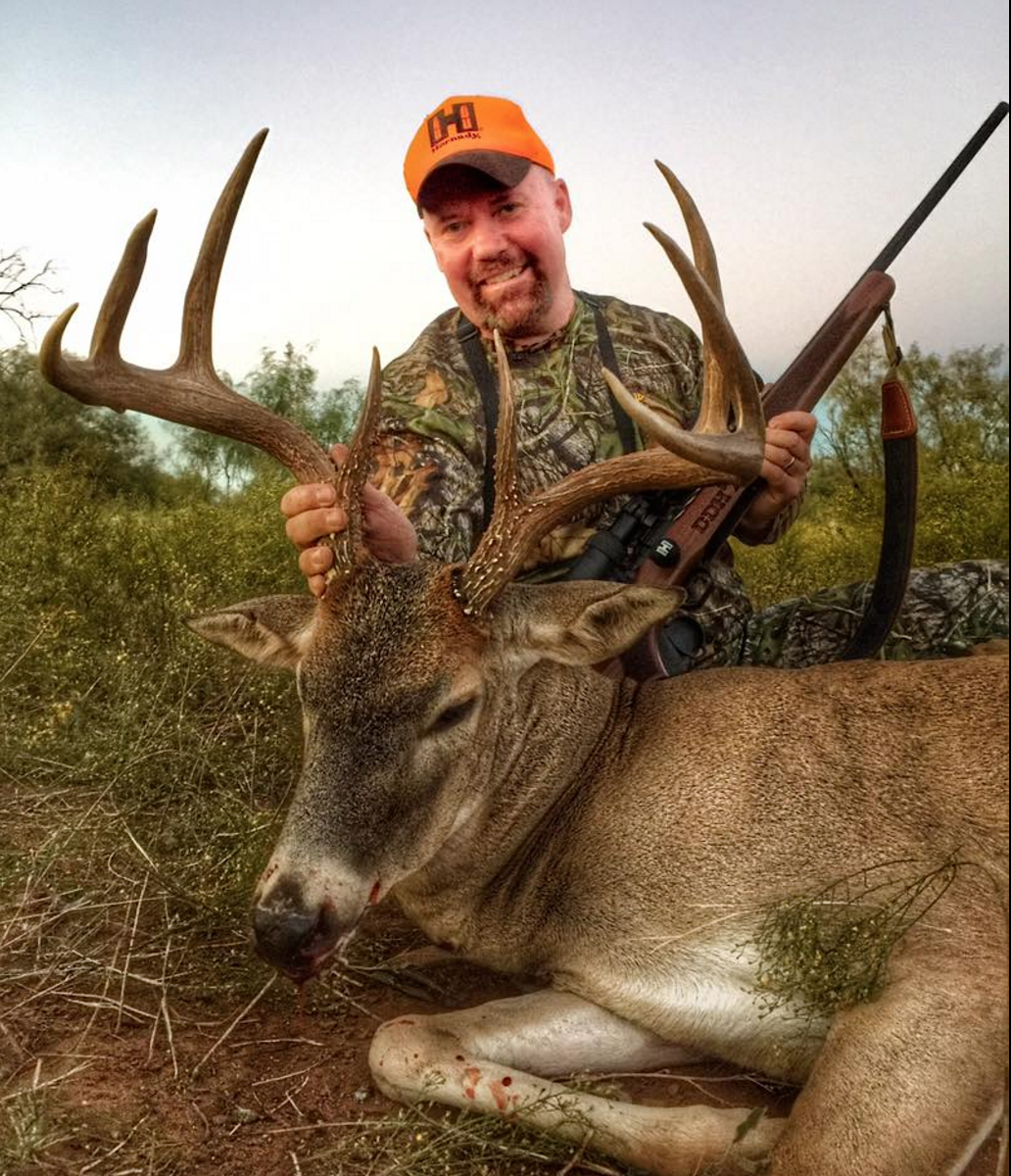 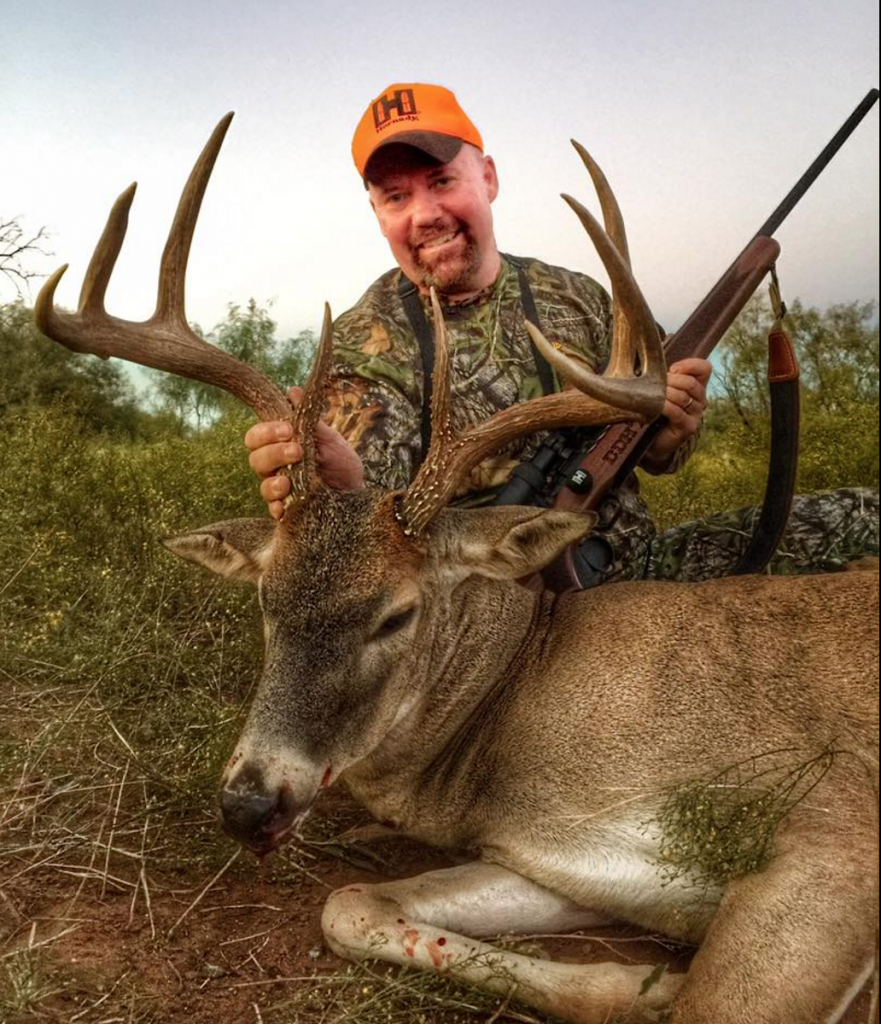  The author is all smiles after bagging his North Texas buck. Despite its impressive size, this buck was considered to be a management deer that was on the decline due to its age. The buck was aged at 8.5 years old. Definitely a fantastic buck!

North Texas offers some of the best deer hunting in North America — if you can stand the heat and avoid the creepy crawlers.

Sweat dripped from my forehead as I climbed a 10-foot ladder leading to a well-position box blind. The mercury was pushing 80 degrees on this late October afternoon.

“Whoa!” I exclaimed while opening the door and noticing a half-dozen or so yellow jackets flee the blind.

“Nope. This is not happening,” I told D&DH-TV cameraman Jay Ellioff as I retreated to the ground. “I’m allergic to bee stings, and we’re a long way from town.”

Thankfully, we had cell service. I texted our guide, Jon Heaton, and asked if he could put us in a different spot for the afternoon.

“No problem,” Jon replied. “Be right there.”

As we walked back to a trail head to meet Heaton, Ellioff offered some sage advice.

“You know,” he said. “It seems like the best hunts always come right after something bad happens.”

WILD WEST ADVENTURE
When you hunt anywhere in the South early in the season, you have to expect some distractions. And when it’s Texas, well, there can be complications. This trip was filled with them. 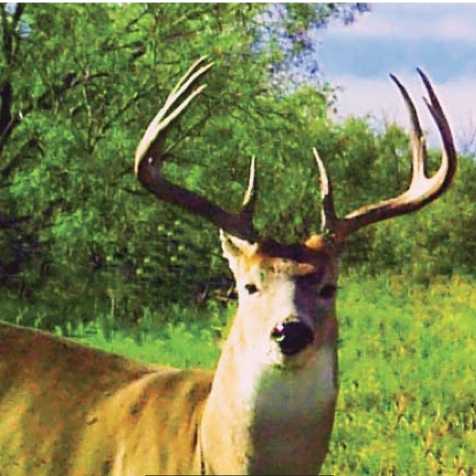 This mature 8-pointer eluded hunters for more than five years at the Patterson Ranch until the D&DH crew arrived. (Photo: Jon Heaton)

My hunt had started two days earlier when D&DH video editor Abigail Hehner and I settled in for our first hunt at the Patterson cattle ranch near Aspermont. While moving our blind chairs into position, we encountered one very active and not-so-happy scorpion. We managed to avoid it and sit long enough until we had a group of mature does in the food plot. And, seeing this was a management hunt, I gladly pulled the trigger on a big nanny so we could exit that blind and its prickly occupant.

That was just the beginning of our adventures. Over the course of the next few days we had close calls with fire ants, diamond- back rattlesnakes and one menacing black widow spider. Heaton nonchalantly dispatched all of them. That’s all in a day’s work for this hard-nosed Texan.

I know what you might be thinking. But, hey, we’re Midwesterners. We just don’t get this stuff at home. It kind of creeps us out.

HEAVEN ON EARTH
One of the few things that didn’t creep us out was the incredible beauty of this wild oasis. The Patterson is a hidden gem of an 18,000-acre cattle ranch just north of Abilene. I learned about the ranch six months earlier during a visit arranged by TenPoint Crossbow Technologies and fellow whitetail enthusiast Tony Timmons of Austin.

The ranch has been in Butch Nuding’s family since 1896. White- tailed deer were sparse for decades, but that changed about 20 years ago as optimal growing conditions and light predator populations allowed deer to grow in numbers and, for bucks, size. Then, about 10 years ago, Nuding’s son-in-law, Jon Heaton, started guiding limited numbers of hunters as a way to help manage the resource. 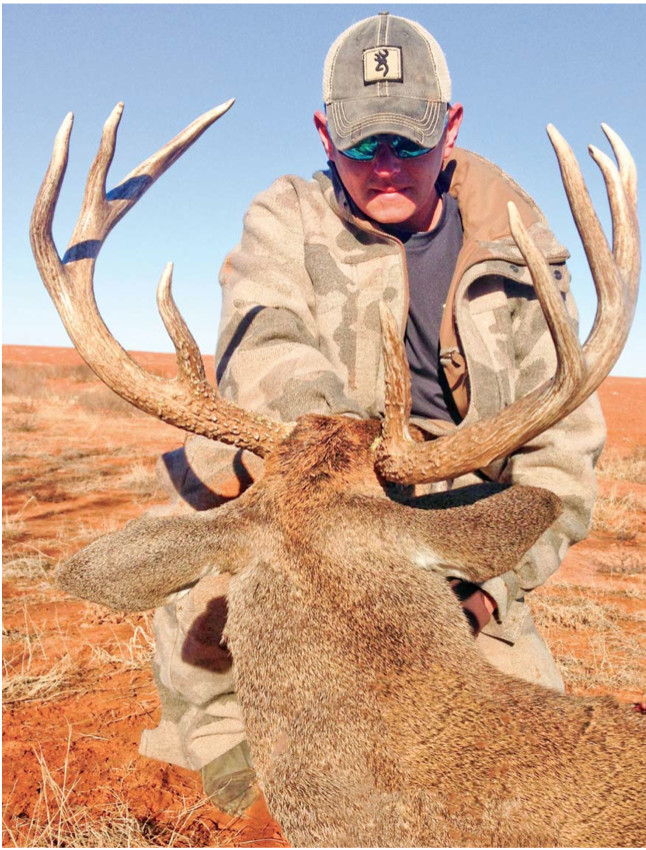 Patterson Ranch near Aspermont, Texas, is a hidden gem for top whitetail hunting of free-range deer along with seeing tons of wildlife. Veteran guide Jon Heaton admires one of the ranch’s top bucks. (Photo: Jon Heaton)

When I first toured the place in February it didn’t take long to fall in love with the topography. Despite signs of ranching and some habitat work, this land is as untouched as you’ll find in Texas. True, there are some of the modern conveniences such as feeders, box blinds, graded gravel roads and some food plots, but it is all wild, free-range land.

The sheer size of the property allows most deer to die of old age before they would ever step in front of a hunter’s rifle, bow or crossbow. There are no guarantees — other than you will likely see game and lots of it.

“I’ve loved deer hunting my whole life,” Heaton said. “To me, it’s more about what you might see — kind of the surprise effect — that gets me excited to spend the entire fall on the ranch. It’s a lot of work to manage deer like this, but it sure is rewarding.”

WATCH: How to Age Whitetail Deer on the Hoof

MANAGEMENT OBJECTIVES
Texas is unique when it comes to such early season opportunities in that the state provides large land- owners with its Managed Lands Deer Permit (MLDP) program. The program allows landowners to take out what it considers “management” bucks, as well as a prescribed number of antlerless deer.

Nonresident hunters can take advantage of the opportunities, too. Many bucks that are considered culls in Texas are wall-hanging trophies in most other parts of the country. In that respect, it’s a win-win situation all the way around.

I obliged by filling a doe tag on my first visit, then another on the first morning of this hunt. With another group in camp targeting only does, this gave us the chance to try to take a good management buck.

After several days of close-but-no-cigar encounters, a few missteps and our encounter with the wasps, Heaton decided to pull out all the stops and have us try a blind that hadn’t been hunted in almost two years.

“There is a big 8-pointer in this area,” he said as we drove to the spot. “He’s old. Very old. I’ve personally tried killing him many times, but I’ve never seen him while hunting. I don’t know how old he really is, but I do know that he was mature when I first got him on one of my trail cameras in 2009.” 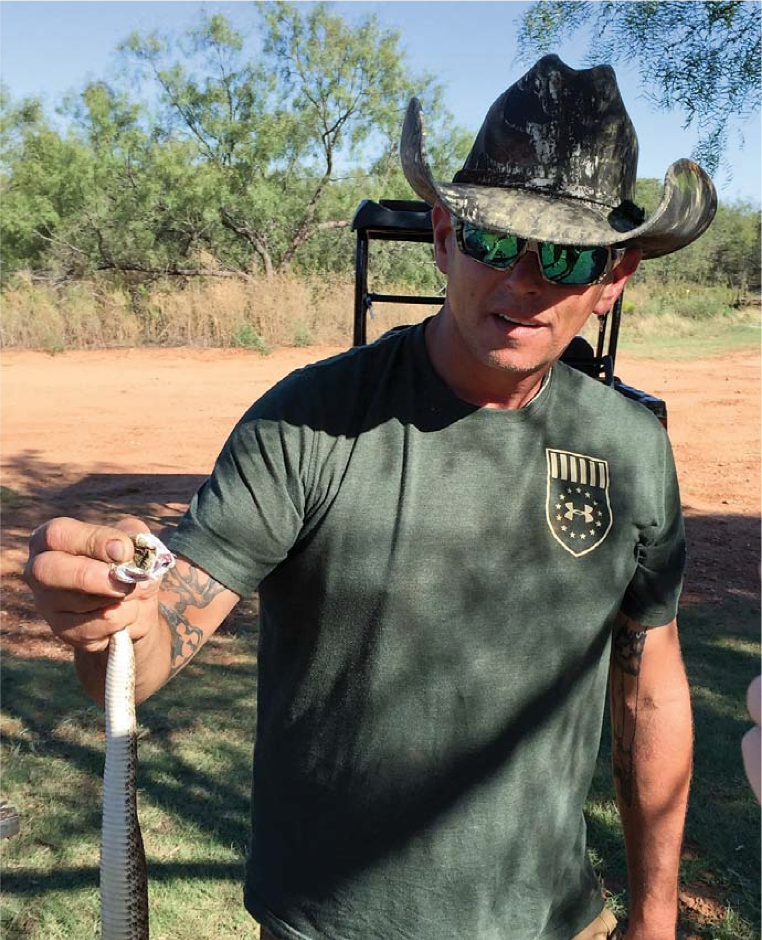 Jon Heaton at Patterson Ranch deals with rattlesnakes all the time. Some, like this one, he catches with his hands and relocates away from houses or dispatches them permanently. (Photo: Jon Heaton)

HURRY UP AND WAIT
Heaton showed Ellioff and me the way to the blind, wished us luck and said he’d meet us at dark-thirty. The midday sun was unbearably hot in that little box blind, but we did our best to settle in and watch for signs of life in the nearby brush.

One hour turned to two. Two turned to almost three. That’s when I noticed a flicker of movement about 50 yards to our left. It was a mature doe.

The doe was traveling solo, and she just stood there and stared at the brush. She was awfully wary; not so much of our presence, just to her entire surroundings. After nearly 20 minutes of cautious browsing and surveillance, she meandered to the east and out of sight in a tangle of mesquite and scrub brush.

Then, just a few moments later, another deer appeared suddenly near a distant protein feeder location. 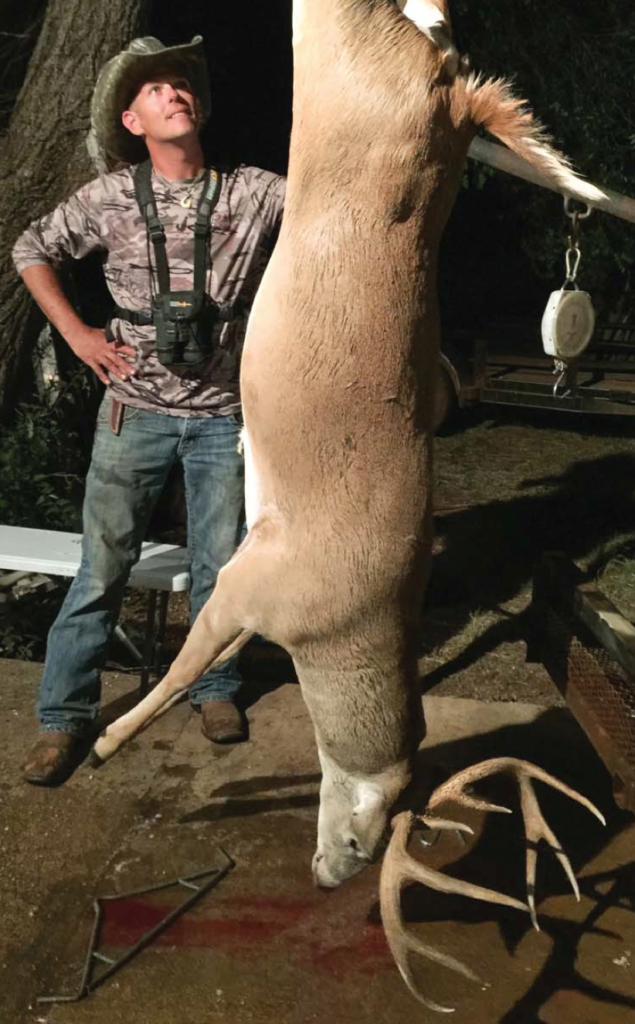 Don’t believe what “they” say about Texas deer being ridiculously small. It’s simply not true. This mature 8-pointer tipped the scales at 182 pounds on the hoof.

THE STARE DOWN
Video camera rolling, Ellioff was anchored stone still over my left shoulder as a monster of a buck stared at our blind from about 110 yards away. The deer exhibited every trait of an old monarch — sway back, drooping belly and blocky shoulders. His demeanor oozed of the bold confidence I’ve rarely seen in a white-tailed deer. He was just incredibly beautiful.

The old buck stared, slightly bobbed his head, licked his nose and kept his shoulders tucked behind a mesquite limb. 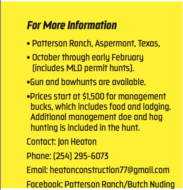 “Don’t move,” I hissed with arms frozen in mid-reach for my rifle. “My gosh … don’t move.”

Seconds turned to minutes. The once swirling wind was now blowing steadily from the buck to us. His nose would not save him on this day.

The buck finally relaxed and high-stepped his way around the hog- fence barrier surrounding his favorite protein feeder. He wasn’t interested in eating; he wanted to further investigate that lone doe.

Those few hoof steps distracted him enough that it allowed me to raise my Mossberg Patriot and rest it ever so gently on the blind’s window sill. My hands trembled, and my heart pounded so hard I could feel the pressure in my ears.

The surrounding Texas brush was so thick the buck would be but a memorable encounter if I didn’t act fast. Tracking him in my Nikon scope, I waited for him to pause before settling the cross-hairs dead center on his neck joint.

He was on the ground before the shot’s echo finished ringing in my ears. The monarch was dead, but the incredible memory was just beginning.

— Dan Schmidt’s heart-pounding hunt for the old Texas buck will be featured in an episode of D&DH-TV this season on Pursuit Channel. Shows are airing now as part of the exclusive D&DH Saturday Night Deer Camp.