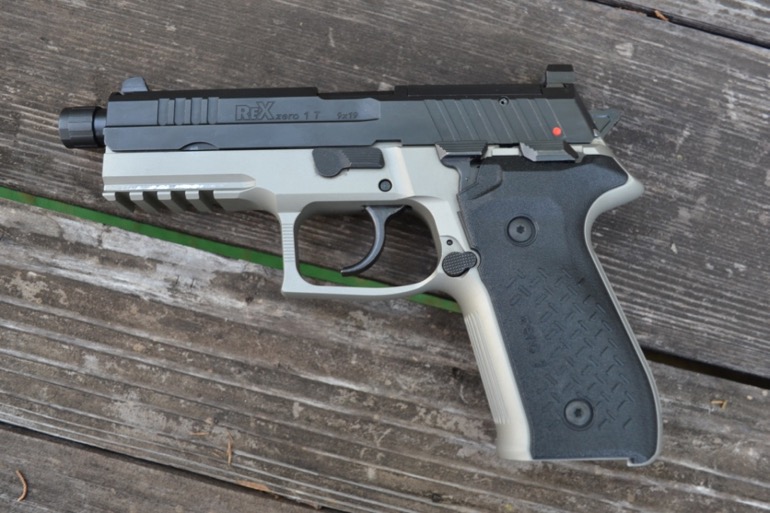 I have been cheating on my Beretta 92 for about a year now. The Italian has served me well, but I have found something new. My new love is an awkwardly named Slovenian, the Arex REX zero 1. And it does things my Beretta can only dream of.

Earlier this year a new version was released, the Arex REX Zero 1T. As in all things gun-related the T stands for tactical. If you need a refresher on the Arex or are scratching your head saying “Trex what” Jeremy’s review of the standard version is a good place to start.

The tactical version adds a micro red dot-ready slide, a threaded barrel and dumps the 17-round mags for slightly extended 20-rounders. 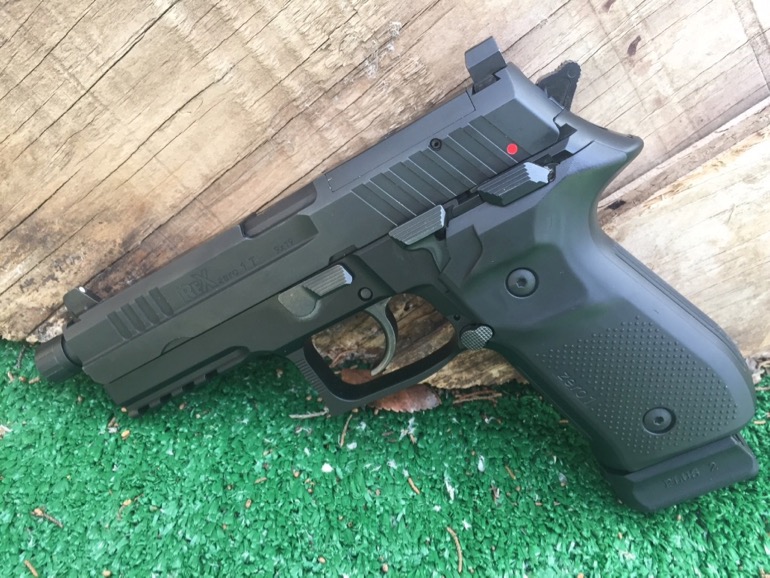 If it looks like a SIG P226 and feels like a SIG P226 it might be an Arex REX Zero 1. The similarities are uncanny, except the price. To get a threaded barrel SIG P226 you will need to part with $1,359. The threaded barrel Arex REX Zero 1T will run you only $781 and allow you to mount a micro red dot. If you want to put a micro red dot on your SIG you’ll need to have the slide machined which adds more than a little additional expense. 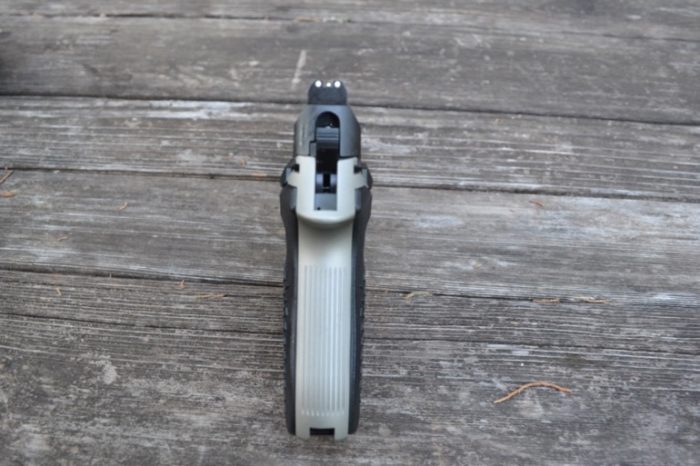 The Arex REX Zero 1 T features suppressor-friendly high sights. They’re not adjustable or illuminated, but in most situations, the sights do their job well. 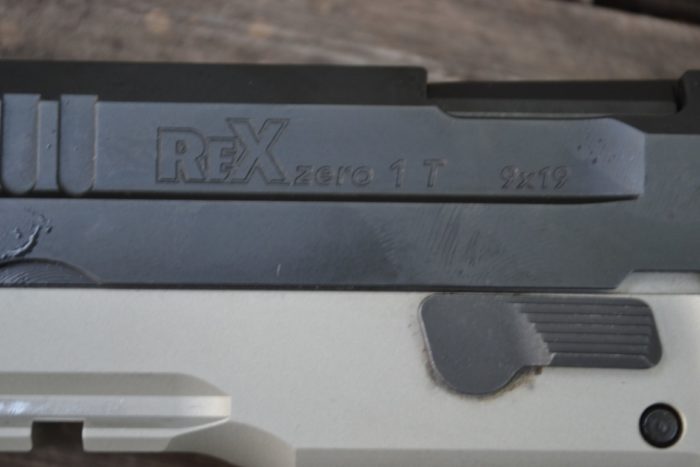 The Arex take-down lever automatically closes when you rack the slide during installation. That’s not a huge plus, but it is a thoughtful design feature. 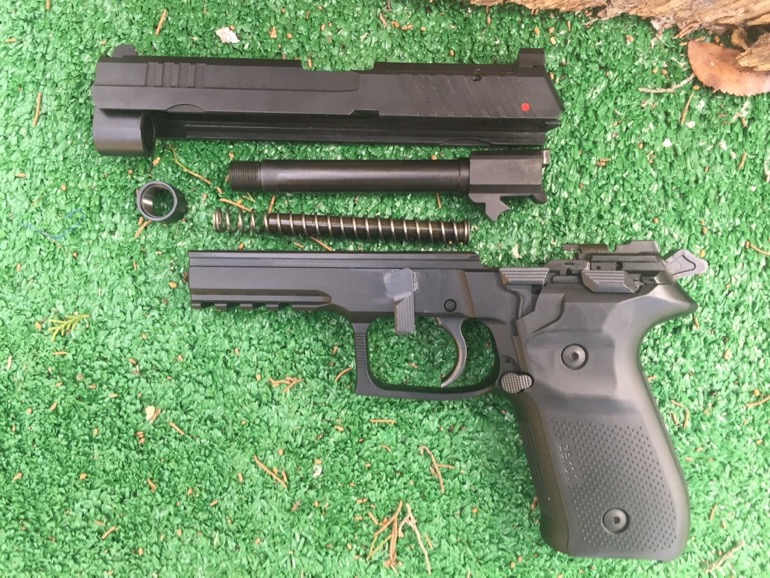 The nitro carburized finish on the slide and barrel is even and tough. 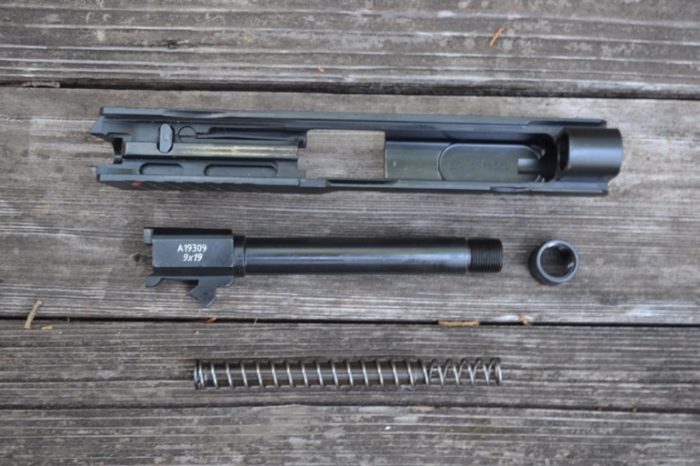 You will find no tooling marks on the REX zero 1T at all. 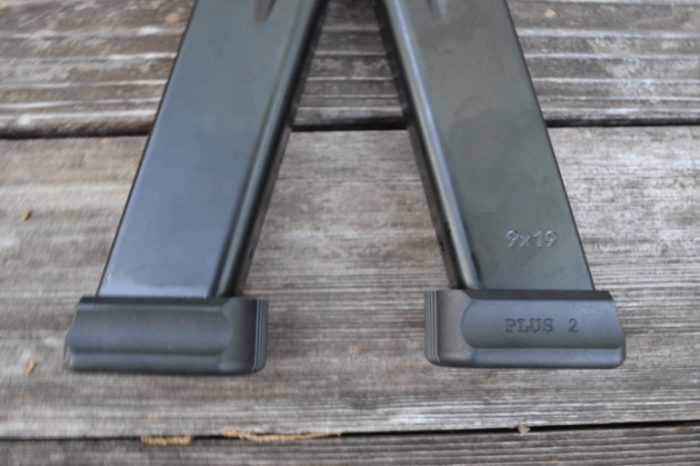 The magazines never failed to lock the slide open on the last round or drop free with authority, even when dirty. The 20-round magazines are very well made. The finish is tough and the springs are powerful enough to ensure reliability while still being easy to load them full. 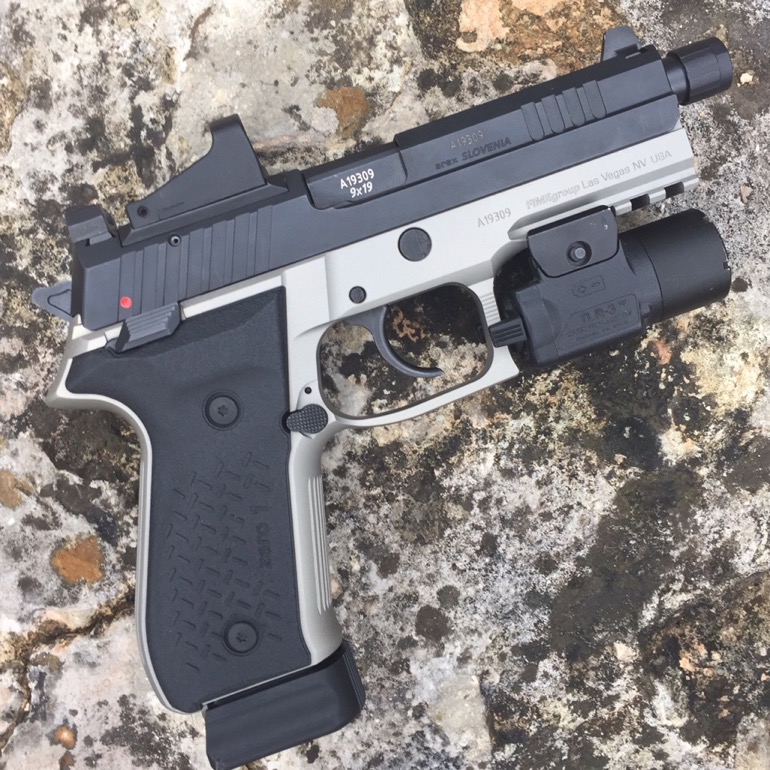 I’m not a fan of micro red dots on pistols. I find that I’m faster with iron sights. I’ve been practicing and am getting better, but I probably wont be a micro red dot enthusiast anytime soon. However it’s nice to have the option of mounting one.

The four included red dot base plates will allow you to mount any of the popular red dots including the Vortex Venom, Doctor, Shield, Trijicon, Burris, C-More and Meopta. Switching out the plates and installing a sight is fast and simple. 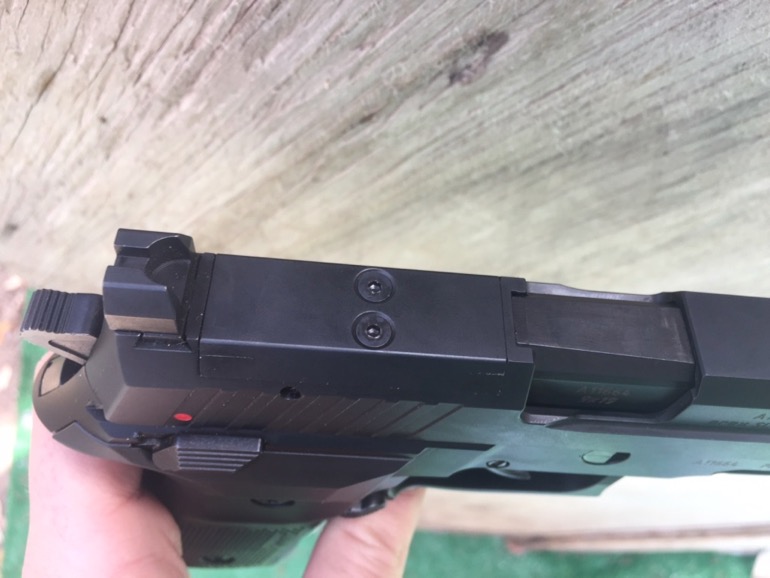 Unscrew the factory-installed plate with the included Allen wrench. 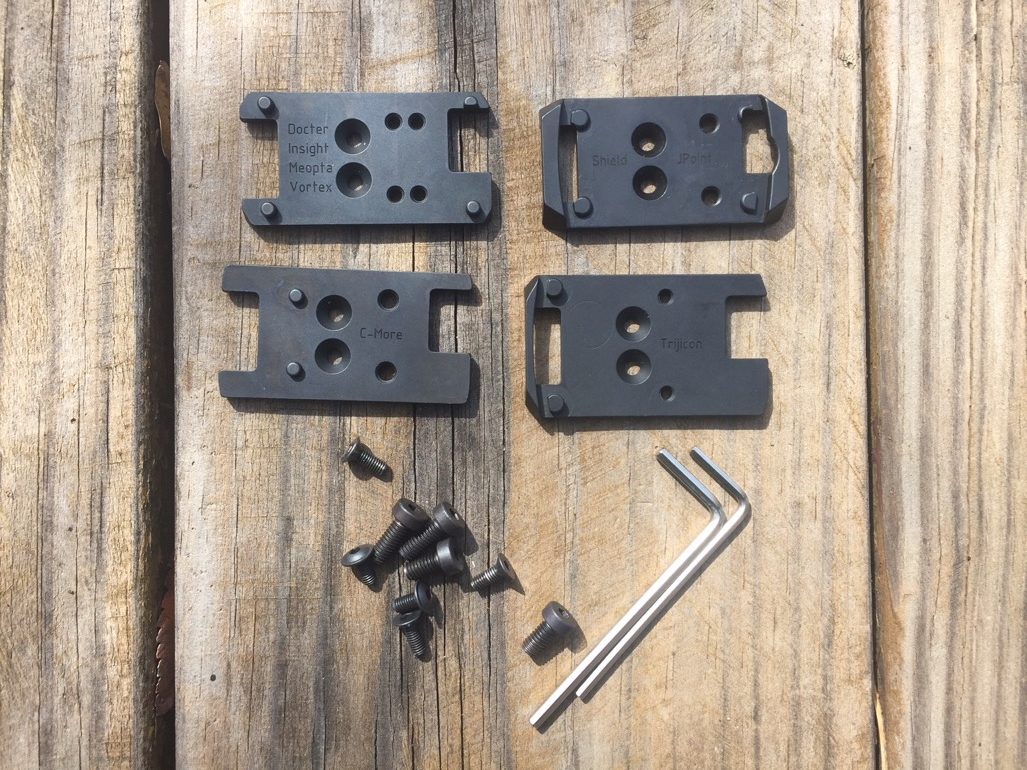 My favorite feature of the Arex series is the slide release/de-cocker lever. With the slide to the rear, depress the lever once and the slide goes into battery, leaving the gun cocked and in single action mode. Press the slide release again and the gun de-cocks and is now in double action.

I really like having options; single action, double action, safety on or off, whatever carry style you prefer, the Arex has you covered. 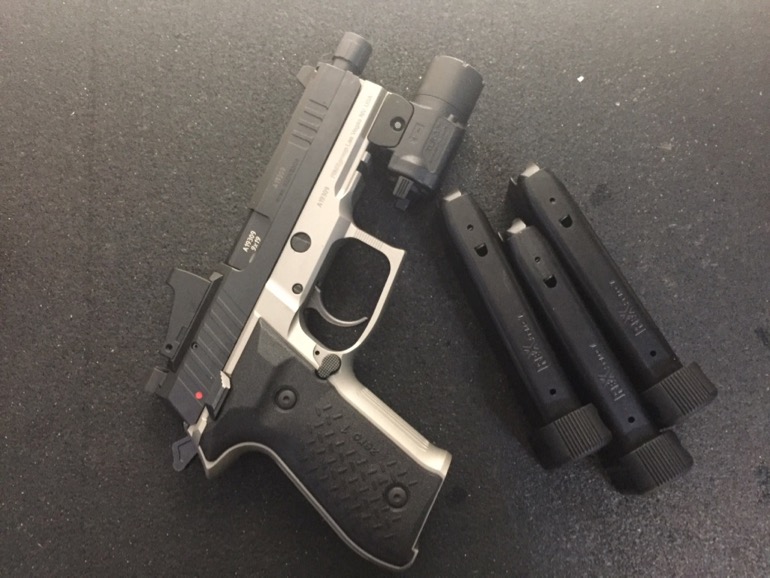 One unusual aspect of the REX zero 1T is its rail. It’s slightly out of spec which prevents some accessories from staying put. That caused my Streamlight TRL-3 to walk off after about 60 rounds. I tried tightening the light down harder, but it wouldn’t stay put. 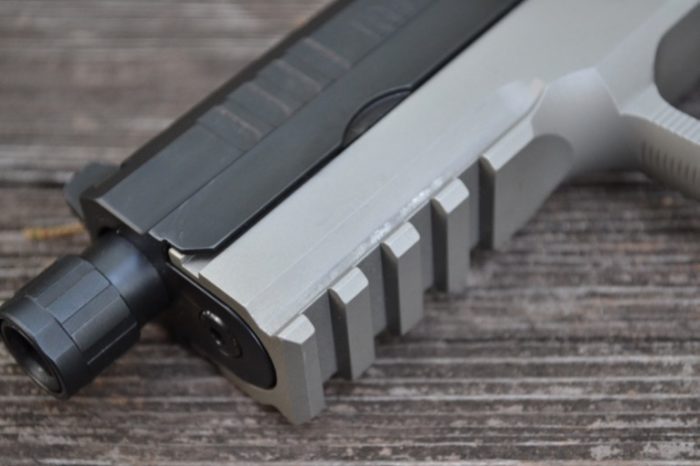 Long term, I will be finding a light that fits the gun better, but for now the TRL-3 works. In a home defense situation I doubt I will be firing 60 rounds. If so a light walking off would be the least of my concerns.

In the photo above, you can see some scratches on the rail. These were caused by my ZRODelta bipod mount. I don’t blame the mount as it hasn’t scratched any other guns I have had it on. 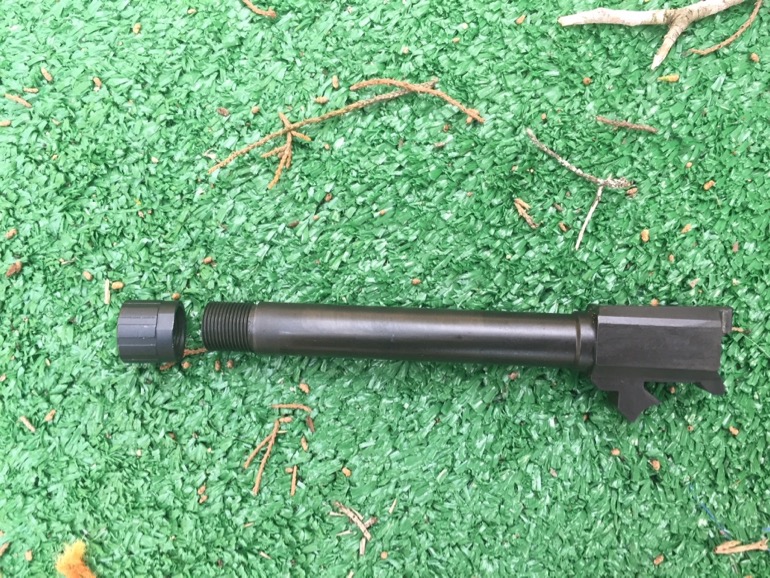 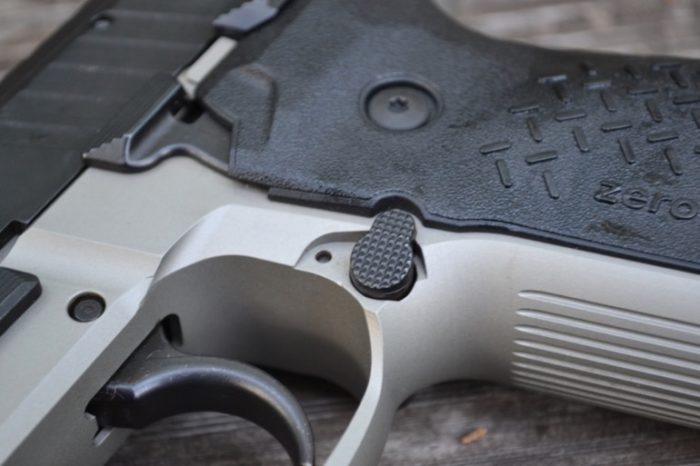 The trigger on the REX zero 1T is much the same as on the standard model. In short, nothing to write home about. But it’s smooth with very little grit, it breaks cleanly and has an average reset. It’s more than good enough for a duty pistol. 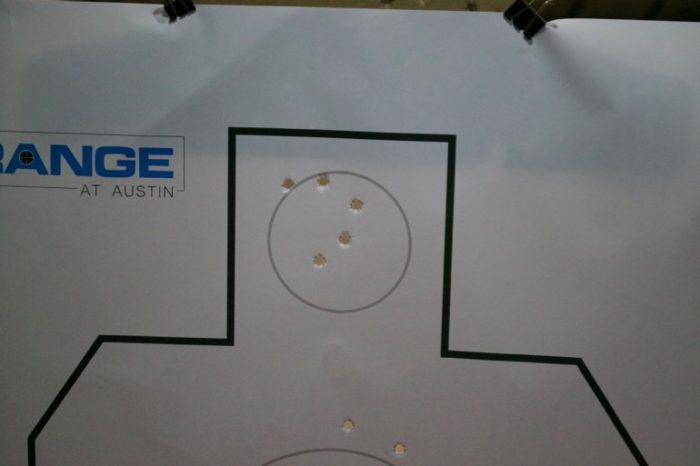 The Arex REX zero 1T is definitely not a competition gun (AREX will be releasing one soon) but it’s more that accurate enough for duty or home defense purposes. The above target was shot at 15 yards using a Harris bipod in a ZRODelta mount. Not a bad five-round group for a duty pistol. 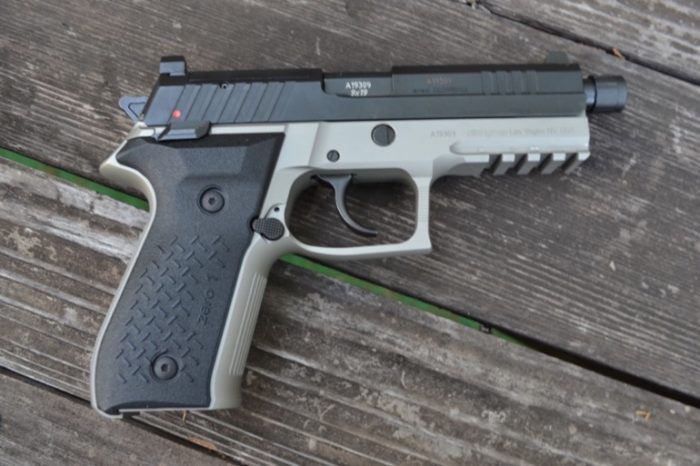 I shot just over 500 rounds through it with complete reliability. My Arex Standard model has over 1,000 trouble-free rounds through it. While my testing was nowhere near as thorough as the Military Arms Channel’s I can say it’s been noting but reliable. Arex claims the pistol has at least a 30,000 round service life, I believe them and will eventually find out.

The Arex REX zero 1 series has grown considerably over the last couple of years. Originally you had one choice, the black standard model. They now offer 32 SKUs in Compact, standard, tactical or compact tactical with the standard tactical colors available across the product line. 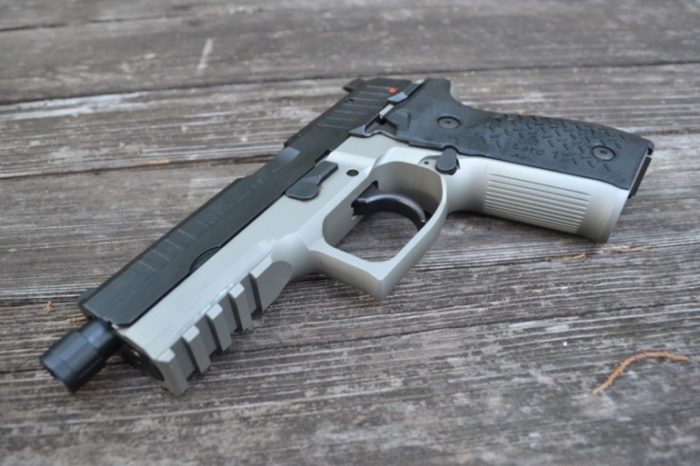 Overall I give the Arex REX zero 1T a full three thumbs up (I am polydactyl or was when I was born anyway). I have now shot three different Arex REX zero 1 pistols extensively and all of them have performed the same: flawlessly. The trigger is smooth and has a decent break and reset. It’s no competition trigger, but it’s a great duty gun trigger. The safety is easy to operate, but somehow still low profile. Aside from the strange, slightly out-of-spec rail, it’s a near-perfect duty pistol. I can honestly say, and frequently do, that the Arex REX zero 1 is the best pistol for the money.

Ratings (out of five stars):

Style: * * * *
It doesn’t have the sexy lines of a nice 1911 or Colt SAA, but it’s pretty in the way that a Land Rover Defender is pretty. It looks good because you know what it can do.

Ergonomics: * * *
Plenty comfortable for regular use. The double-action trigger pull is looong, but very useable. Small-handed shooters will have a real reach.

Customize This: * * * *
Grips and holsters are available, but you won’t find a huge selection. It’s suppressor ready and will take any micro red dot out there, though finding a light that won’t walk off might take some doing. I’ll do some testing with the more popular lights and see what works and doesn’t.

Overall: * * * *  1/2
The Arex REX series are just about perfect duty guns. If the rail was in spec this would be a five-star gun. Even with that quirk, the REX zero 1T is still the best gun for the money on the market.