Gun Review Follow-Up: Another Look at the SIG P365 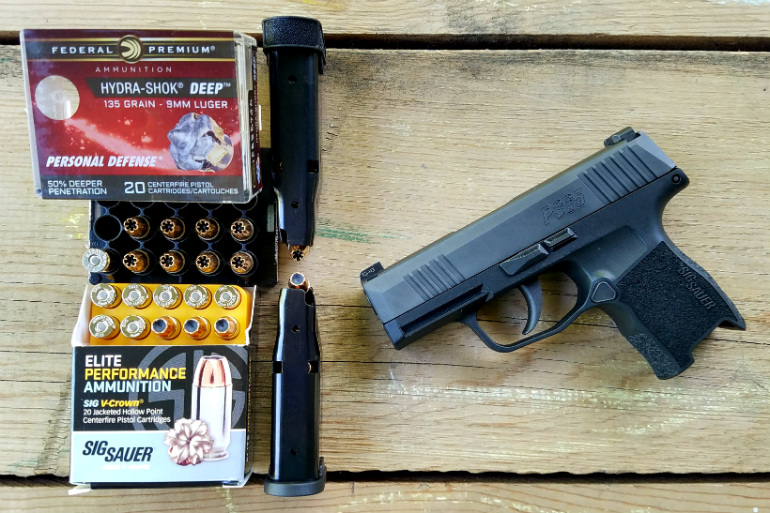 SIG SAUER has a huge hit on its hands with the P365. Who in their right mind wouldn’t want 10+1 rounds in the footprint of guns that typically hold 6+1? Our man John Boch sure loves his, giving it a well-deserved five star review.

But, alas, the P365 isn’t proving to be all rainbows and unicorn backstraps, as a good number of early purchasers have reported running into serious problems . . . 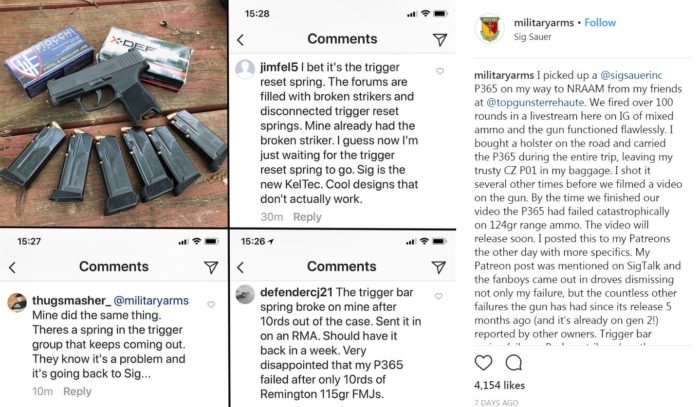 Over on their Instagram page (and YouTube), the Military Arms Channel has documented many of the recurring complaints. Trigger springs breaking, failures to go into battery, and broken strikers seem to be plaguing P365 owners. Or at least those who purchased early, ahead of SIG’s first round of in-line changes. 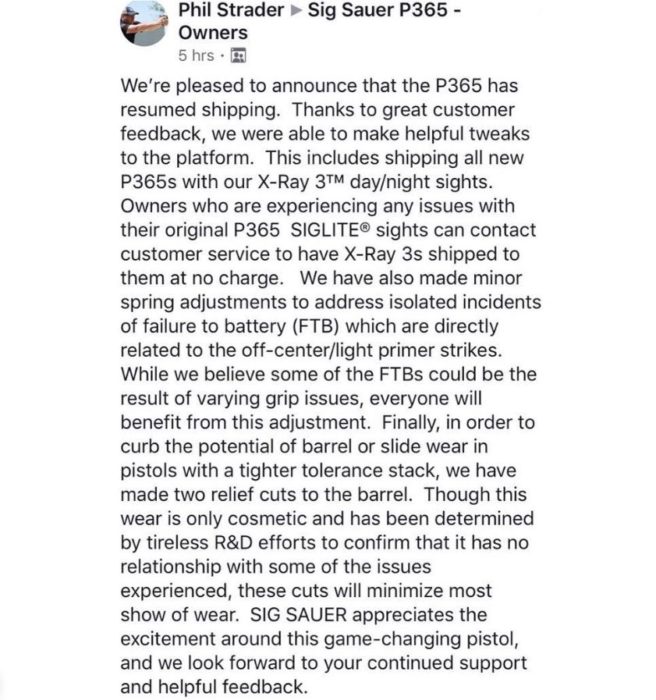 What’s that? In-line changes? But it’s a brand-freakin’-new product! Yeah, you’re tellin’ me.

This wouldn’t be the first time — far from it! — a firearms manufacturer has been accused of effectively beta testing on its customers. Heck, it isn’t the first time that charge has been levied at SIG SAUER.

Reports of early guns failing — physically breaking — within a couple of boxes of ammo and showing “cosmetic” problems like barrel peening after a single range session don’t inspire confidence in the testing done at the factory. I suppose, at least, it’s nice that SIG kept an eye on market feedback and suspended sales of the gun while working on bug fixes. 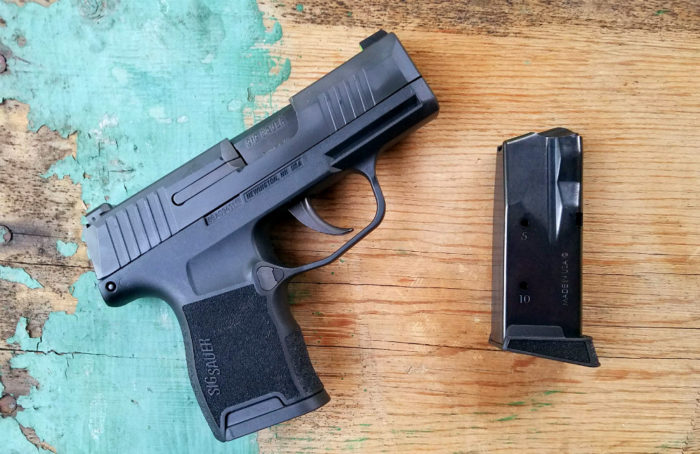 My P365 is what I suppose we’re calling a second generation model. Yes, it’s awfully early for a Gen2 (the P365 was only announced four months ago), but it is what it is.

Considering the documented issues mentioned above, I took mine straight out of the box and put 1,000 rounds through it. 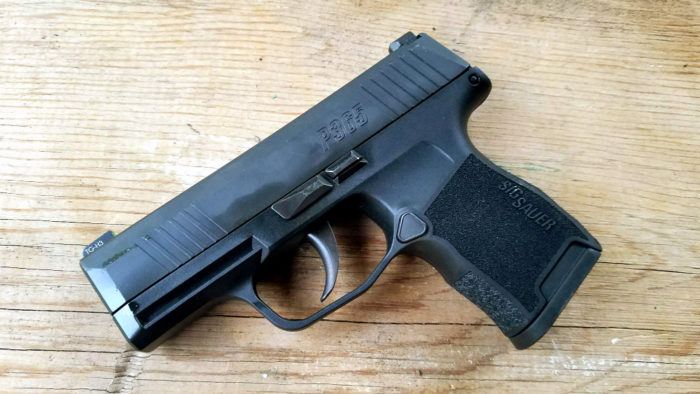 Seven brands of hollow points, ball ammo in every bullet weight (well, from 92 to 165 grains) and powder load out there, zinc projectiles, and two brands of frangible projectiles later and I encountered precisely zero issues of any kind. This P365 fed, fired, and consistently ejected every single round. 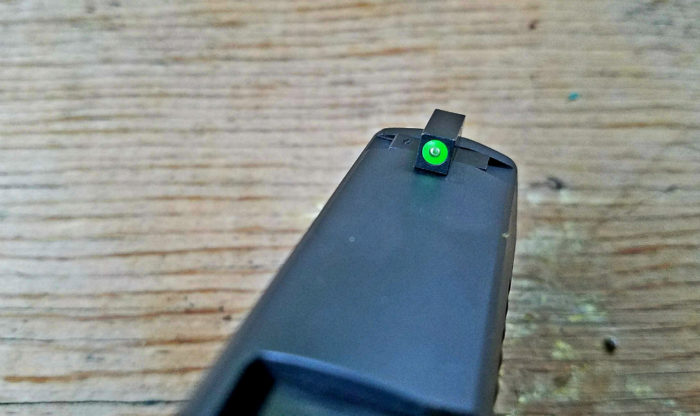 I found the X-Ray sights to be absolutely fantastic for my eyes and shooting style. I was shockingly fast and accurate with this little pistol. Simply put, it makes me look like a better shooter than I am. 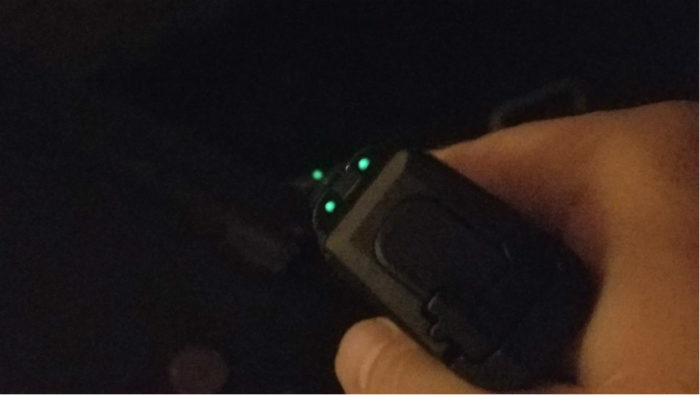 Pinging steel at silly distances and shooting within 15 yards as fast as I can pull the trigger showed better accuracy than I can get out of most handguns. The P365, despite its diminutive size, is an easy gun to shoot well.

A great trigger helps. After some first stage-like take-up, it stops against the sear and then breaks at five to five-and-a-quarter pounds with minimal creep and a crisp release. The reset is short — audible and tactile — and if you ride that reset you won’t repeat any of the take-up on subsequent shots.

Naturally, on my second range trip I forgot my second magazine. So somewhere between 850 and 900 of the rounds fired through this gun were fired using the flat baseplate mag. My pinky got a little bit beat-up from riding the front edge of the baseplate or wrapping under it, but it didn’t affect my shooting.

Turns out, I’m glad I put so many rounds through a single magazine. Apparently, as noted by the Military Arms Channel, one of the signs of a wonky and likely-to-fail P365 trigger return spring is the fact that it sticks into the magazine well and scratches up the magazine. 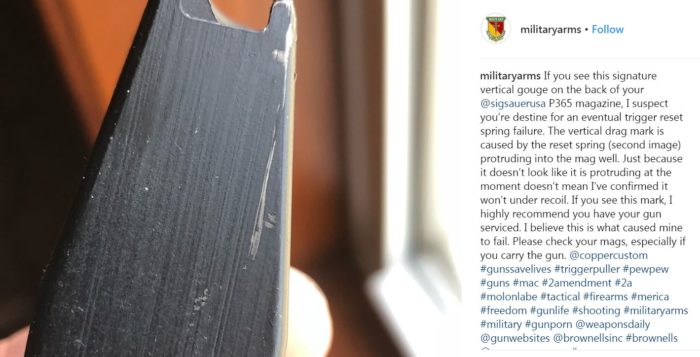 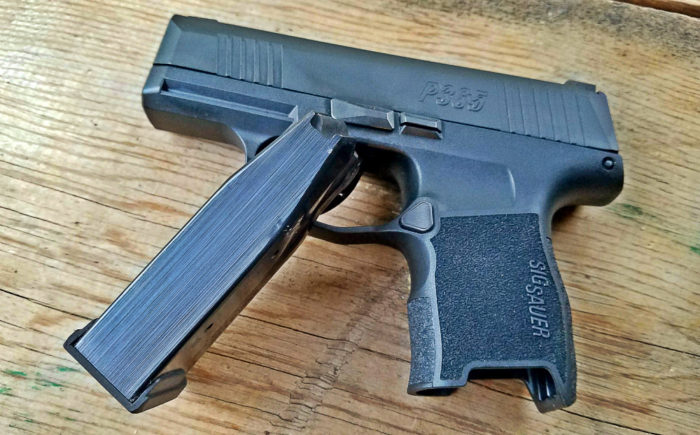 I think it’s getting a light touch from the tip of that spring, but it most definitely is not dragging on the magazine body. There’s no line of finish missing, let alone a gouge like in MAC’s photo. Just a shiny spot of worn finish where a hole in the magazine well exposes the tip of the return spring. 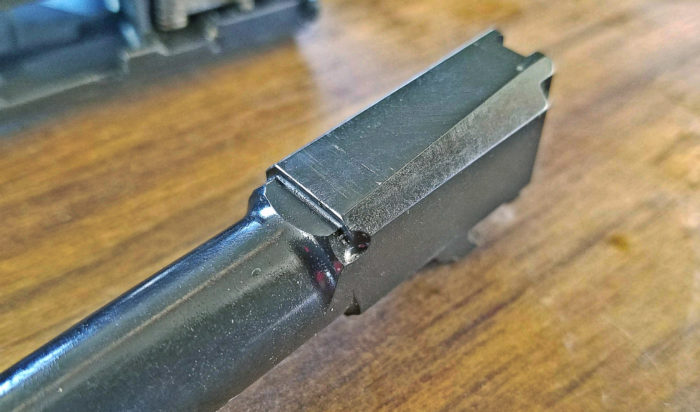 No barrel peening. In fact, the barrel looks brand new. I’m shocked by the 99.9% lack of finish wear after a thousand rounds. 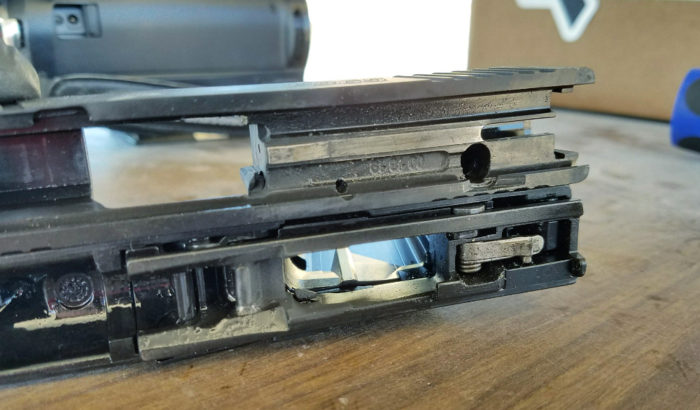 It’s dirty, but it’s good. No signs of wear anywhere. Everything checks out, everything looks good. Flawless, really. 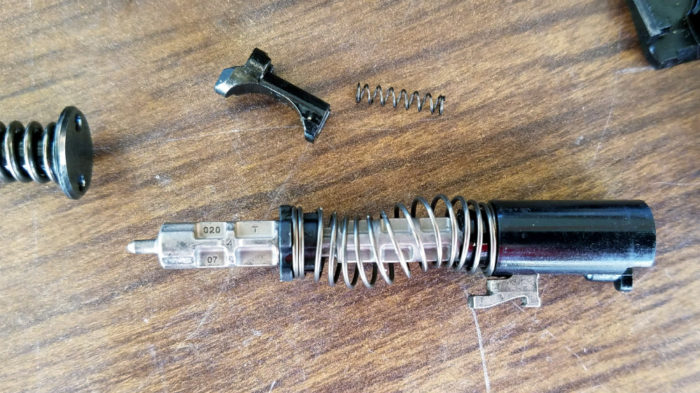 No odd wear on the firing pin. I don’t know if SIG has changed anything here or if my firing pin is as likely to break as some owners have seen. Or maybe you have to be unlucky from the get-go for that to occur.

From reports, it does seem that broken firing pins have happened fairly quickly in most cases. That’s possibly a consistency issue with the MIM process and you either get a solid unit or there’s an occlusion or something that results in a critical weakness.

And the tip of the P365 firing pin does need to be strong. Perhaps stronger than usual. 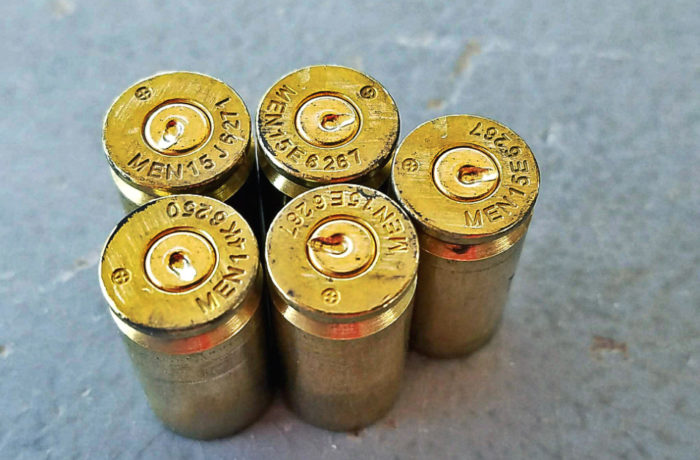 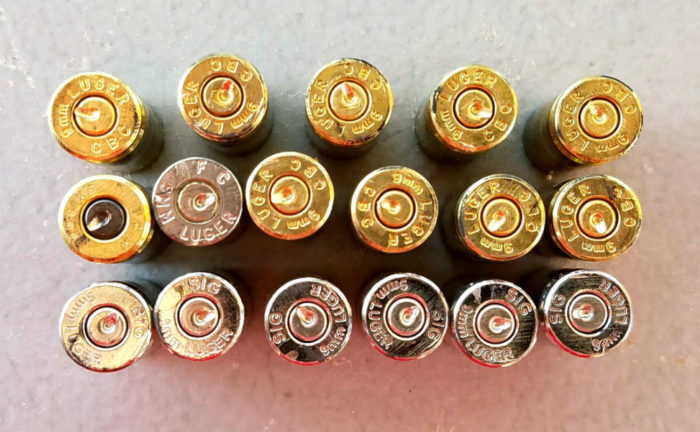 As so many have reported with the P365, mine exhibits fairly severe primer swipe. This is caused by the barrel camming downwards to unlock before the firing pin has fully retracted.

That could be fixed with a stronger striker return spring or a longer delay in the action before it unlocks. Of course, that second one is hard to do in a micro-sized pistol, and a stronger return spring could result in light primer strikes. 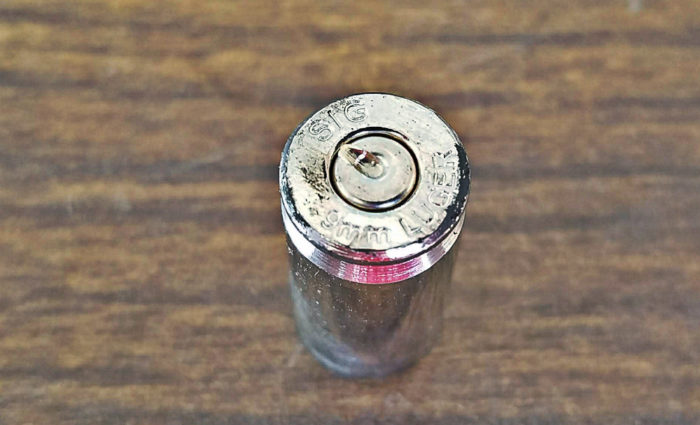 Now, a lot of semi-auto pistols with Browning-style tilt-barrel locking mechanisms exhibit some degree of primer swipe. Especially striker-fired guns, as a firing pin gun is all “return” spring and no “strike” spring (the spring doing that job powers the hammer instead of the firing pin directly).

That said, the primer swipe owners are seeing from their P365s, including me, is extreme. There was no brand of ammo that didn’t show it, and it happened on every round fired. It’s more swipe than what I’d consider acceptable.

First, it puts undue wear on the firing pin, which really shouldn’t be experiencing any lateral stress in the first place. I worry for its longevity.

Second, while the primer is soft the brass case is not. If a particularly soft primer is encountered, perhaps on a hot round that cycles the slide extra fast, and the tip of the firing pin drags through the primer and hits the case inside the primer pocket…not good. While steel should beat brass, there’s a lot more meat to the case head than the tip of the MIM’d firing pin. 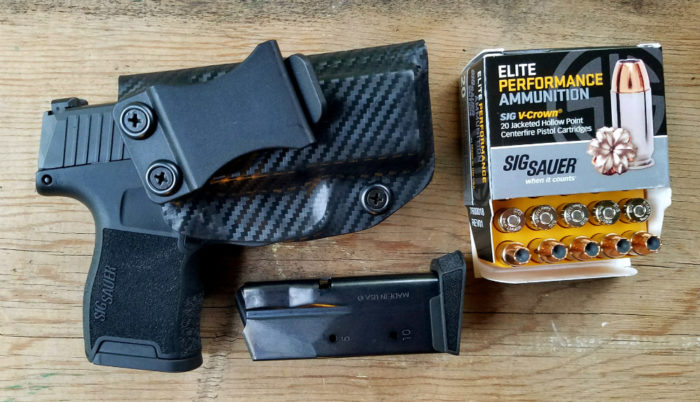 In the end, as much as I love the P365 — and I really do…it’s a five star gun in every other possible way — I have reservations about carrying it. Yeah, it crushed through 1,000 rounds fired as fast as my trusty UpLULA and I could load and shoot it, getting hot enough that the front third of the gun was painful to touch.

But that nasty primer swipe combined with many reports of broken firing pins is like a black cloud. Like looming bad news. Murphy’s law and all.

Will it fire the next shot for me? Yes; 99.999% guaranteed it’s going to fire the next shot. Everything is [still] physically fine with this P365. But will that be the shot that snaps the tip off the striker? Will I have 10+1 if I need it? Who knows?

Please send me one machined tool steel striker for the P365.