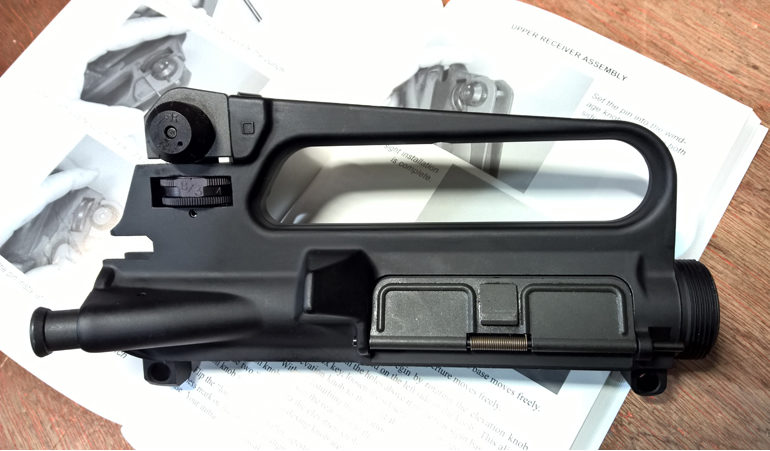 With no prior military service and an affinity for wing shooting, it took a while for USGI builds to reach the top of my list. In fact, I was planning to build a new snow goose shotgun when the opportunity to start on an A2 build landed in my lap. Of course, I couldn’t pass it up. And, honestly, after a slew of higher-end builds, it was probably about time to touch base with the basics. 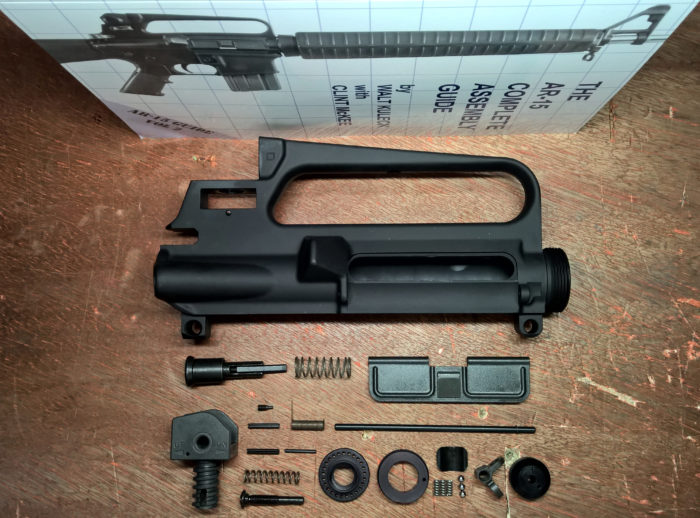 After researching my options, I determined Fulton Armory was the best choice for upper receiver parts due to the overwhelming expertise within their organization, availability of good quality parts and their compatibility, and reputation for customer service. Plus, their prices are competitive, especially for stripped receivers and parts kits.

If you so choose, a small bump in price will also net you a fully-assembled FAR-15 upper receiver. I opted for the stripped upper receiver and parts kits to aid with testing and evaluation of The Device MK I Mod 0, and also because I get satisfaction in successfully building my firearms. 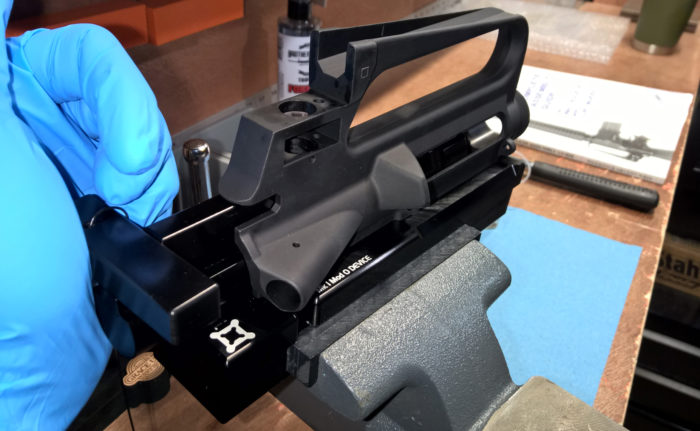 Now, The Device (above) is an animal all its own. Technically, it’s a tool; a beastly hunk of milled aluminum that’s designed to secure upper receivers. Specifically, it provides the most usefulness with assembly and maintenance of A2-style upper receivers. And for this A2 upper it worked perfectly, although it wasn’t needed for many steps in the assembly process. 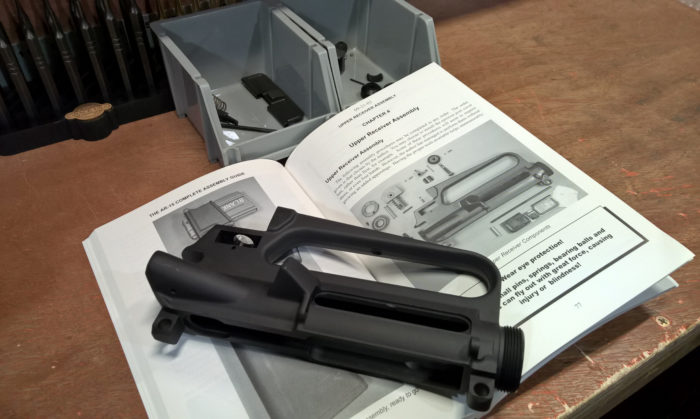 Fulton Armory also won me over a bit with their availability of firearms guides, including The AR-15 Complete Assembly Guide by Walt Kuleck and Clint McKee (see my review here). I found it to be a great resource and I recommend it for all owners of AR-15 platform weapons. 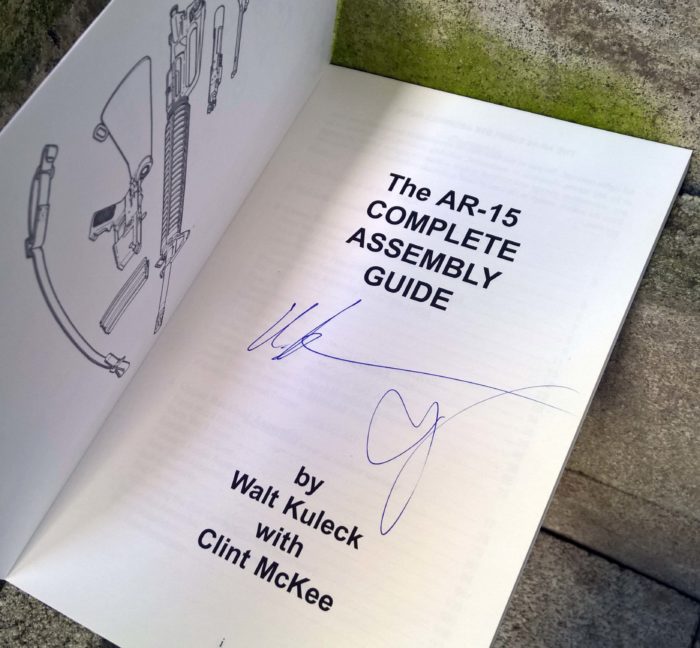 Plus, each copy is autographed, which is a neat way to for the authors to show pride in their work.

But back to the hardware…

The Fulton Armory stripped M16A2 USGI upper receiver I received was nearly flawless. The Type III Hard Coat Anodized finish is as good as it gets – consistent and smooth. I found one near-microscopic nick in the finish that barely made it into the 7075 T6 aluminum; most likely somehow my own doing since Fulton packaged the upper and parts adequately for shipping.

Both the forward assist and rear sight roll pin holes are nicely beveled on the installation sides, as well as the pivot and takedown pin holes in the lugs. 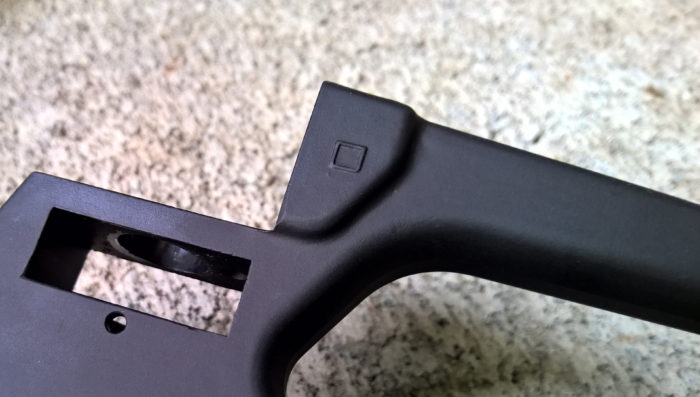 The square forging mark on the left side of the upper receiver is indicative of the Brass Aluminum Forging Enterprises’ work, a USGI Contractor with much experience and a solid reputation for forgings. 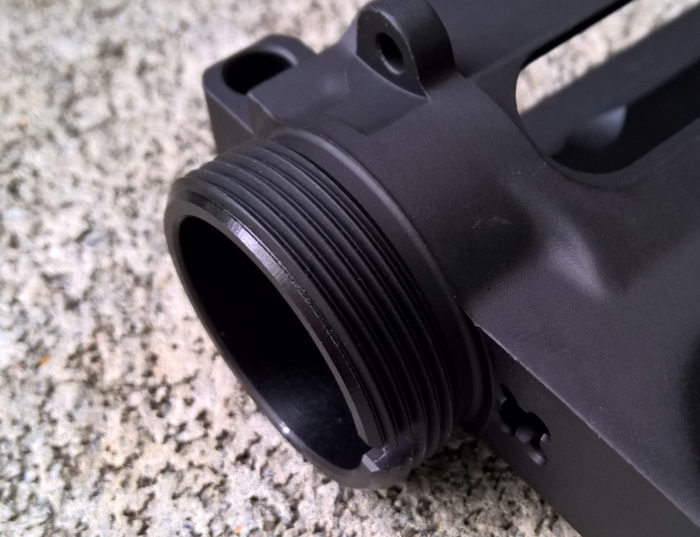 The barrel nut threads were cleanly-cut, sharp, and free of any rogue material or finish. Inside, the receiver is seemingly polished to perfection. 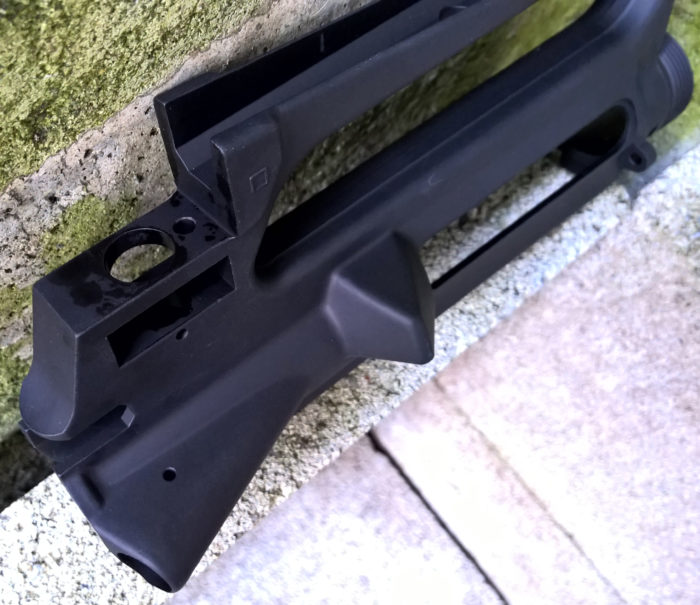 Areas for the rear sight, forward assist, and ejection port cover were all cleanly created and finished and looked great. 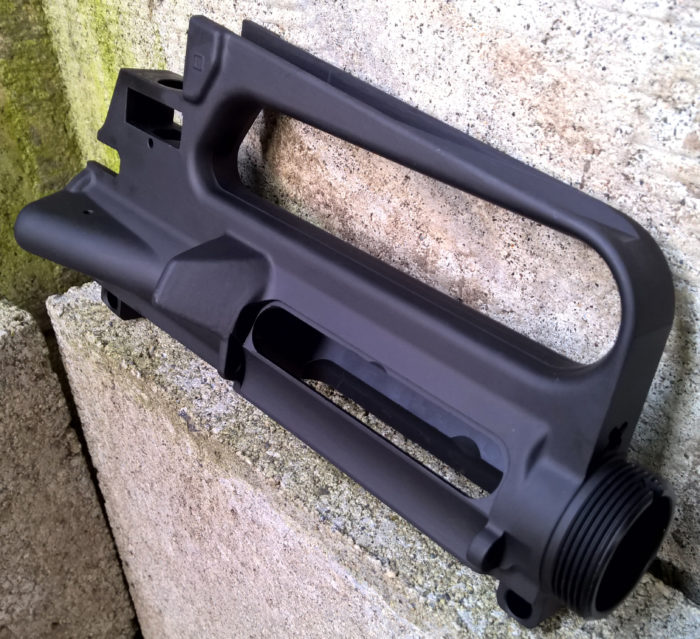 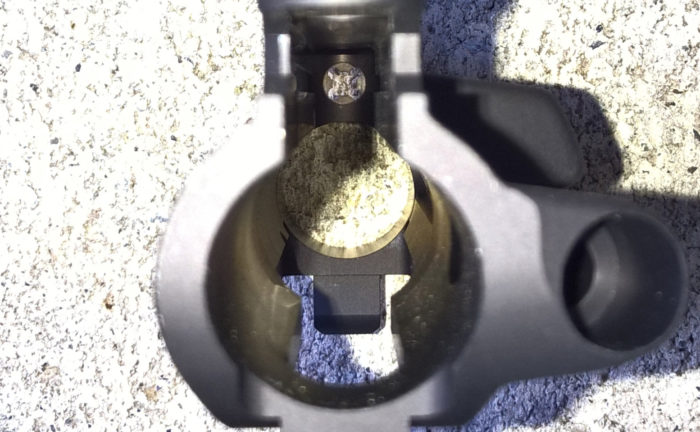 The upper receiver is available with M4 feed ramps, but because of the route I plan to take this build I opted out, as seen above. 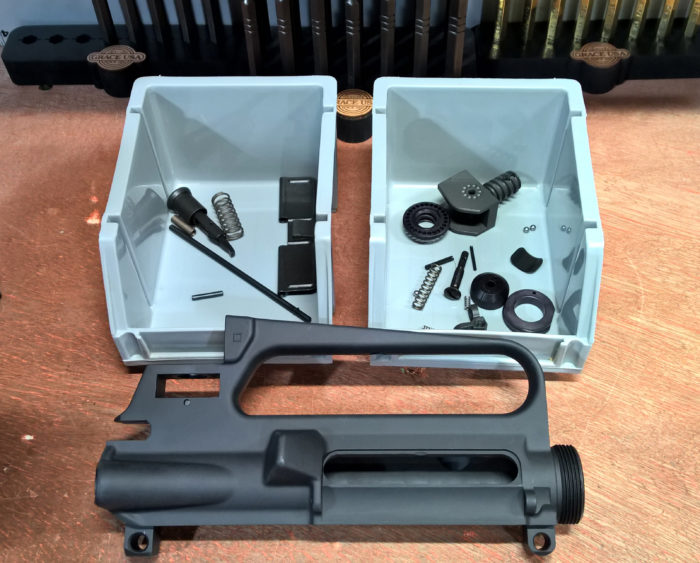 Finally the upper receiver was mated with several lower receivers. Everything fit very well and the stripped upper was locked into The Device to begin assembly. 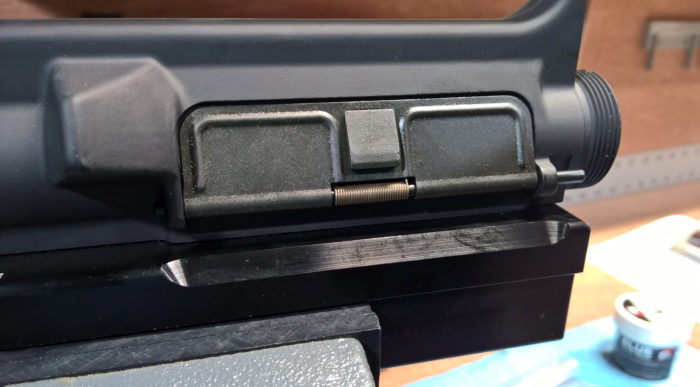 The dust cover went on without a hitch. It fit perfectly to the upper receiver and testing with The Device’s surrogate BCG found it to be mechanically sound, delivering the resounding and satisfying “Snap!” we all expect. 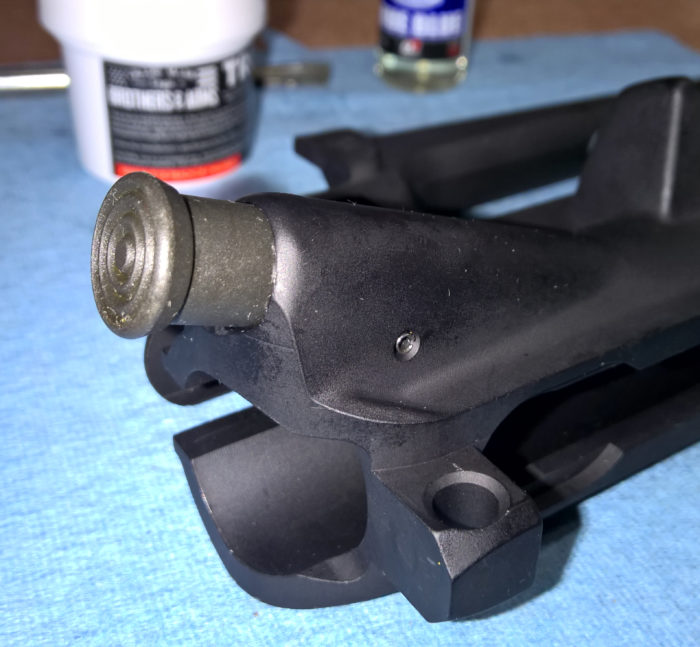 The forward assist assembly moved freely within the forward assist boss and testing with a surrogate BCG and charging handle confirmed the pawl’s positive contact and correct functionality. 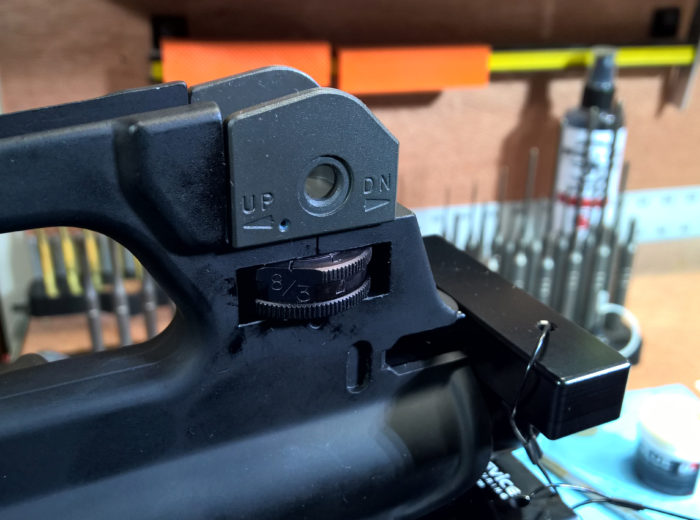 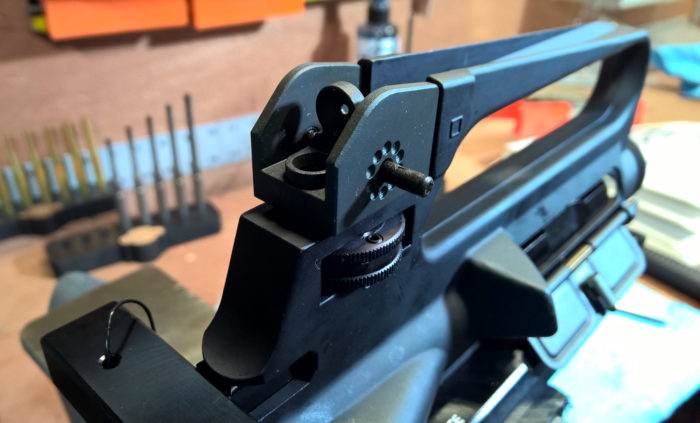 Surprisingly, installing the rear aperture was the trickiest part of the assembly. But only because Fulton includes a very good rear aperture leaf spring that exhibits substantial force on the aperture. 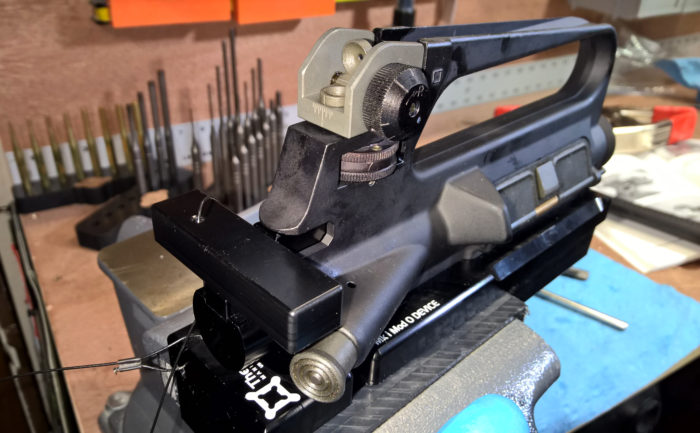 A quick final roll pin through the windage knob followed by a function check of the rear sight and I was in business! As with the elevation knob, the windage knob functions very well, delivering precise adjustments and solid lock-up with zero slop.

Fulton Armory’s A2 USGI Upper Receiver and A2 Upper Receiver Parts Kit were easy to assemble every step of the way. I didn’t find myself fighting any part of the assembly; it all came together as expected.

All moving parts – ejection port cover, forward assist, and rear sight – performed their duties without issue and look great. I expect this now complete upper receiver to fare quite well as part of my FAR-15 rifle build. 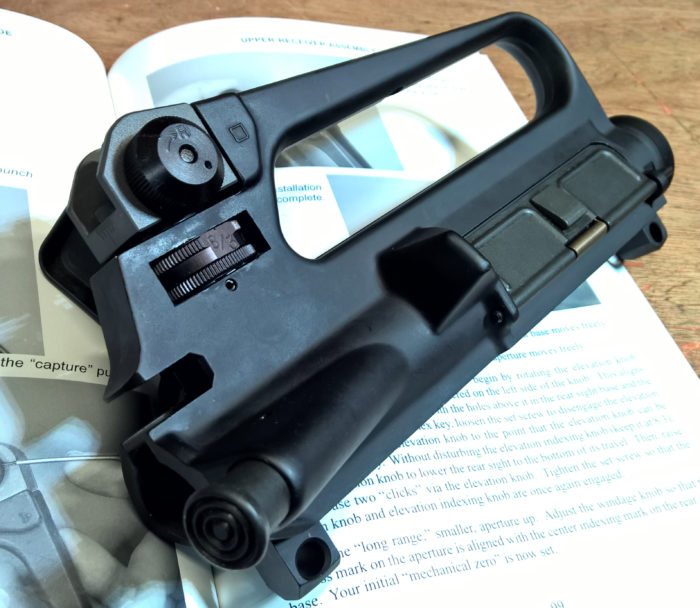 There is an incredible amount of knowledge and experience within Fulton Armory and their guidance and selection of components most certainly did not disappoint for this USGI A2 upper receiver build. All components are top-notch Mil-spec components; well-finished with near-perfect fit.

Of course, this is just the beginning of this rifle build. The completed upper has yet to be field-tested. If I run into issues I will report back, but I have no reason to believe this complete upper will not perform exceptionally well once it becomes a completed rifle upper. As evidenced through this USGI A2 upper receiver build, Fulton Armory is a top-notch resource for U.S. gas-operated service rifle components and advice.