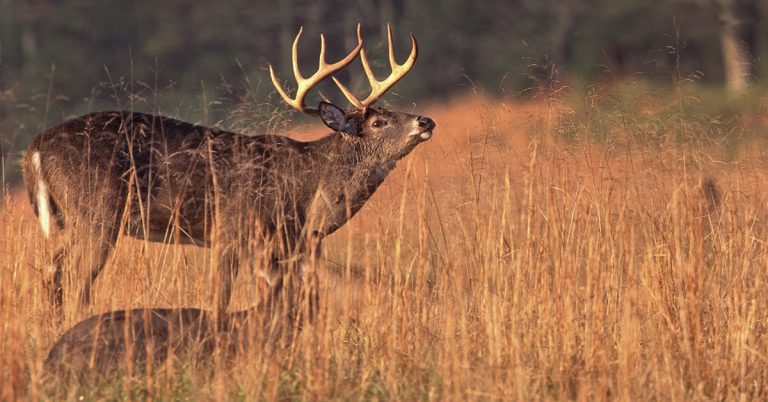 Mature whitetails are secretive, nocturnal creatures. Fortunately, you can break them of that “annoying” habit with this simple strategy.

Probably three styles of deer hunters—those who hunt over food sources and take whatever comes their way, those who hunt the transitional routes between feeding and bedding areas and take whatever comes their way, and those who specifically “nudge” targeted bucks to patterned locations. The latter is the more difficult strategy, but one that can yield big rewards for those willing to put in the effort.

You already know that most big bucks visiting food sources or running scrape lines often do so after dark if you’ve run a trail camera. That’s not a hard rule, but tends to be true in areas with notable hunting pressure or even moderate human disturbance. There’s nothing more frustrating than knowing a big buck is in your area but never being able to put eyes on it during legal shooting hours. The cure is to “train” those bucks to do what they don’t want to do—leave their secure daytime bedding area and tend their scrapes during daylight hours. 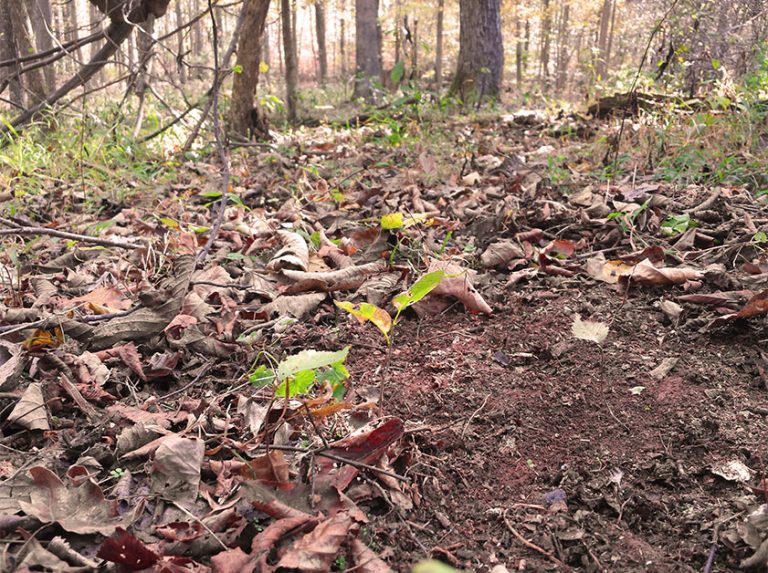 Scrapes, such as this one are, the “social media” centers of the whitetail woods. Mature bucks use them to define their territory, find out what deer are in the area, and ultimately to identify receptive does. Most scrapes, however, are usually tended by big bucks during the night. “Training” bucks to visit their scrapes during the day is the key to maximizing this valuable resource.

A key focal point for whitetail deer is scrapes, and they should be for hunters as well. Scrapes are the social media app of the whitetail world. A buck will work up a roughly circular bare spot in the ground where it will urinate, and lick and rub its head on a low branch above the scrape to deposit scent from his saliva and forehead glands, and possibly his preorbital glands. The general consensus among wildlife biologists and observant hunters alike is that these actions let deer communicate with each other. Bucks, in particular, use scrapes to let other deer know that they are staking a claim to the territory, and as a spot for does in estrus to let a buck know that she is ready for mating. The former is often key during the pre-rut phase, while the latter is critical during the rut.

As such, a resident buck will frequent his scrapes to see who is showing up (does and potential rivals), and to locate receptive does once the rut kicks in. Some experts even claim that a buck’s scrape tending (depositing scent on the ground and the overhead lick branch) helps initiate a doe’s entering estrus. Take the latter as you will, but the fact is that scrapes play an important role to deer, and especially to mature bucks. Translating that into something you can use means getting bucks to visit their scrapes when you are around, not at three o’clock in the morning.

How do you do that? You mess with their heads. 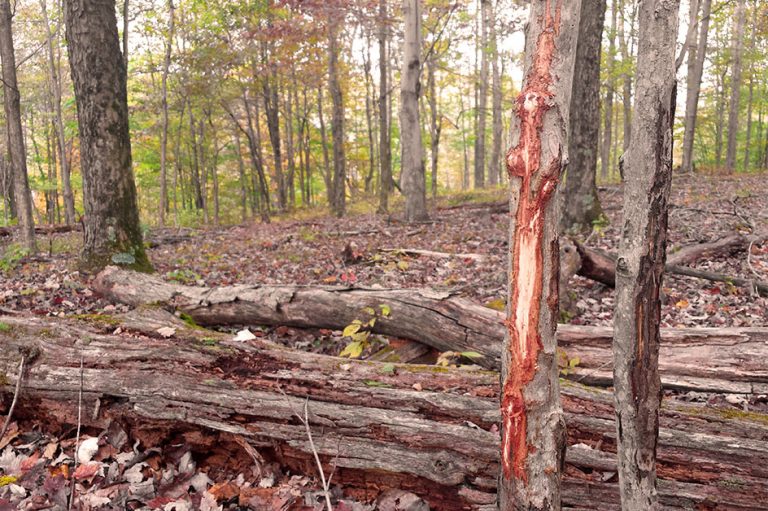 Fresh rubs are often indicative of active scrape areas, and bucks also use them to communicate. A high rub area is often a good spot to consider setting up mock scrapes.

Bucks want to know when a hot doe is coming to their scrape, and when a rival or an immature buck is hitting on their territory. Both generally occur at night, but if you can fool a buck into thinking that things are going on during the day while he’s catnapping in some secluded thicket, the game is yours to play. You can pull this sleight of hand by regularly depositing scent onto an active scrape during the daytime. Eventually, that buck you’ve been seeing on your trail cam at o’dark thirty will start to check out that scrape when the scent deposits are most fresh, hoping to catch a hot date or chase off the interloper.

There are several means to go about this, but the most efficient and economical method we’ve found is the Magnum Scrape-Dripper by Wildlife Research Center. 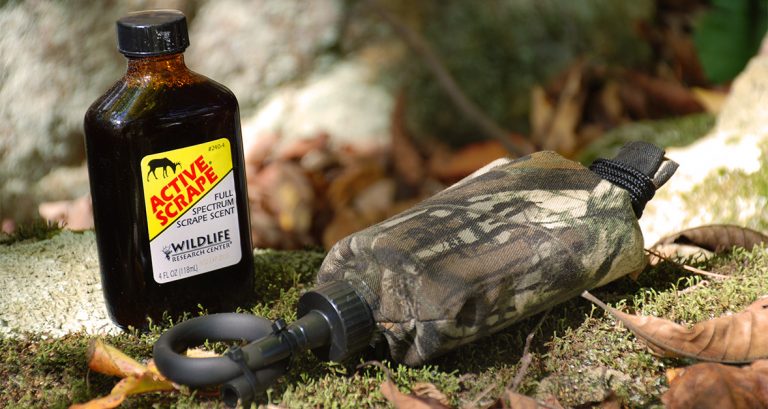 The Magnum Scrape-Dripper is an ingenious scent dispenser that relies on normal daytime/nighttime temperature fluctuations to deliver a steady and measured drip of scent onto a scrape during daylight hours. You fill the dispenser bottle with four ounces of the scent of your choice, and then hang the dripper over an active scrape.

By partially filling the bottle, you leave an air pocket between the liquid scent and the top of the bottle. As daytime temperatures rise, the air in the bottle expands, causing the sent to drip out and onto the scrape. At night, when temperatures cool, the air in the bottle contracts and no scent is released. Simple, and effective. Four ounces of scent will typically dispense over the course of about two to three weeks, which is usually enough time to get your target buck trained to check his scrape during the day, not the middle of the night when you are racked out.

During the pre-rut, we like to fill our Magnum Scrape-Dripper with Wildlife Research Center’s Active Scrape. This formula contains a time-released combination of doe urine with estrus secretions and buck urine, which is the ideal combo to get a mature buck both aroused and torqued off at the same time. You can hang the Scrape-Dripper over an active scrape, or you can create one or more mock scrapes in an area you want a buck to start visiting. Funnels and “scrape-heavy” areas near known bedding areas are especially good locations for creating mock scrapes. 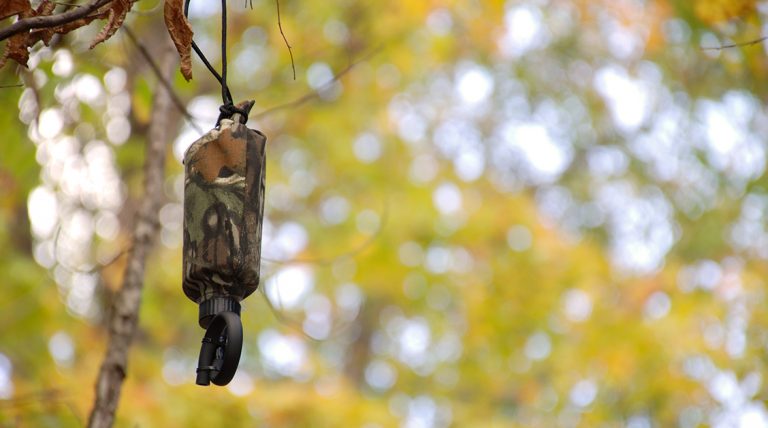 Hang the Magnum Scrape-Dripper as high as you can above an active scrape or mock scrape. Fill it with four ounces of your preferred scent (we like Active Scrape by Wildlife Research Center) and the dripper will deposit scent onto the scrape during the daytime hours for two to three weeks.

Once the rut is in official “go” mode, we continue using Active Scrape in the dripper and add Special Golden Estrus or Golden Estrus Xtreme to strategically placed scent wicks on the days we’re in the stand. By doing this, we’ve exponentially multiplied our chances of seeing Mr. Big between the start and end of legal shooting light.

It is a challenge for successfully hunting mature whitetail bucks. If it weren’t, we’d all have P&Y or B&C specimens hanging on the wall. Many factors are involved when it comes to meeting up with a big buck, but getting them to visit specific locations when you are on the stand significantly puts the odds in your favor.