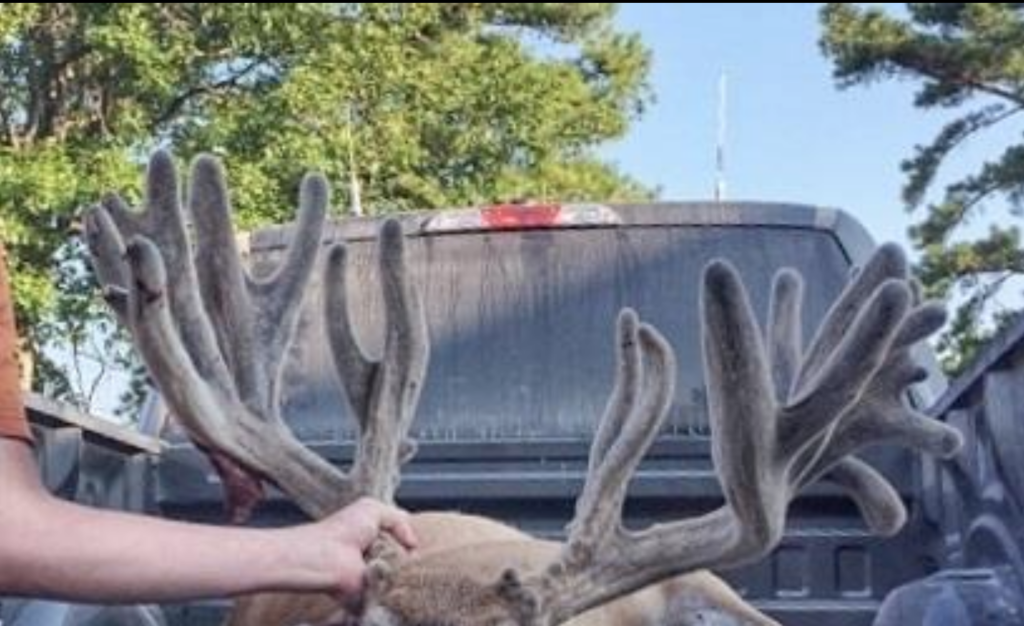 The giant buck hit and killed by a vehicle at Fort Campbell, located in western Kentucky, on July 27 was still putting on bone as evidence by these huge antlers covered in velvet. (Photo: Fort Campbell Fish and Wildlife)

An astounding record-class whitetail buck estimated to be at least 7.5 years old with giant antlers was killed by a vehicle on Fort Campbell military base.

Vehicle collisions with deer are terrible for multiple reasons, the worst being the possibility of injury to the driver or passengers and then the financial cost of damage to the vehicle.

Far down on the list, or it should be far down, is the injury and death of the deer. Some disagree, but deer aren’t humans. They’re animals. While we respect them, they’re No. 2 in the pecking order when it comes to Human v. Deer.

It’s still a doggone shame to see a giant, gorgeous, mature deer like this one killed at Fort Campbell, the sprawling western Kentucky military base that’s home to the 101st Airborne. It’s unknown yet if this was killed on the Kentucky or Tennessee side of the base, which spans both states. The deer was found the morning of July 26.

The Fort Campbell Fish and Wildlife Division posted the following on its Facebook account this morning along with photos of the buck. 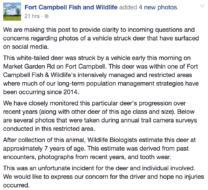 We are making this post to provide clarity to incoming questions and concerns regarding photos of a vehicle struck deer that have surfaced on social media.

This white-tailed deer was struck by a vehicle early this morning on Market Garden Rd on Fort Campbell. This deer was within one of Fort Campbell Fish & Wildlife’s intensively managed and restricted areas where much of our long-term population management strategies have been occurring since 2014.

We have closely monitored this particular deer’s progression over recent years (along with other deer of this age class and size). Below are several photos that were taken during annual trail camera surveys conducted in this restricted area.

After collection of this animal, Wildlife Biologists estimate this deer at approximately 7 years of age. This estimate was derived from past encounters, photographs from recent years, and tooth wear.

This was an unfortunate incident for the deer and individual involved. We would like to express our concern for the driver and hope no injuries occurred. 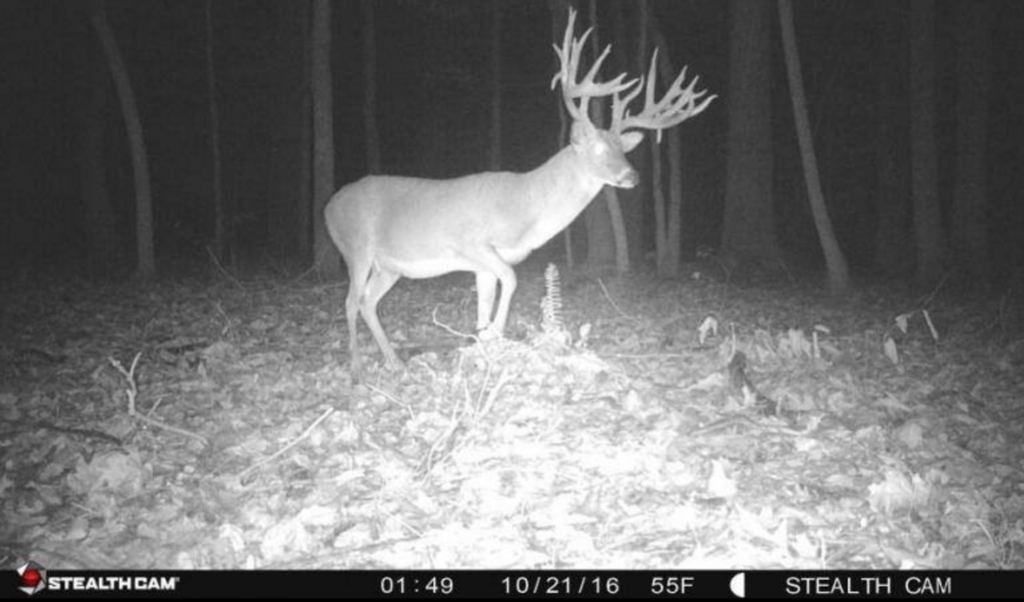 Game camera images captured in October 2016 show this giant buck at its peak. The deer was in a special no-hunting area that is being intensely managed as part of an ongoing project at Fort Campbell in western Kentucky. (Photo: Fort Campbell Fish and Wildlife)

How big do you think this monster buck is? It’s tough to count every antler point but it looks to be at least 19 or 20. Probably are more that aren’t visible so it could be as many as 25 or more. 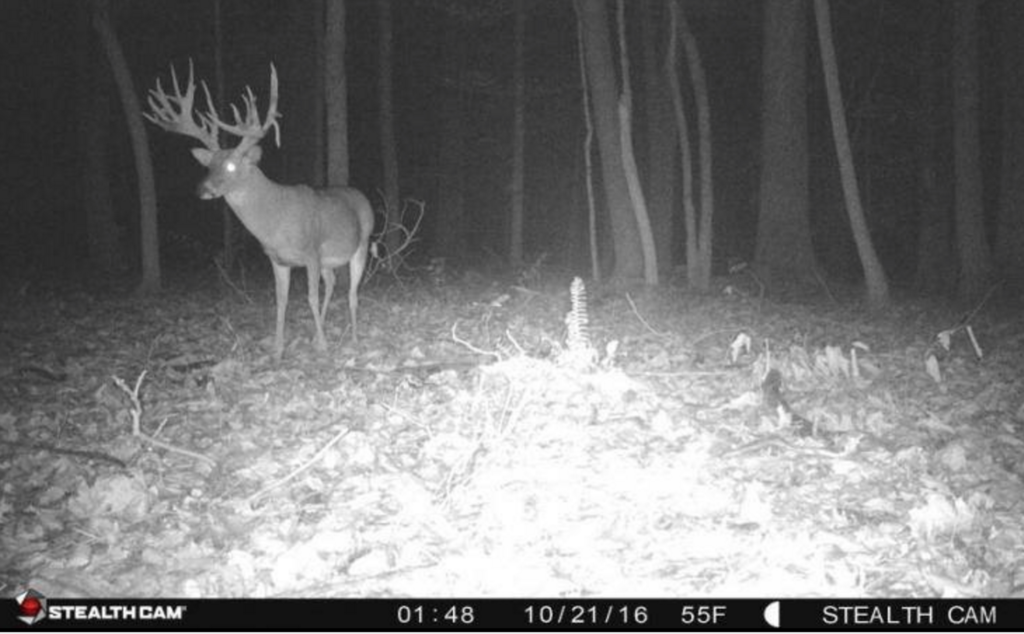 Game camera images captured in October 2016 show a different view of the buck. The deer was in a special no-hunting area that is being intensely managed as part of an ongoing project at Fort Campbell in western Kentucky. (Photo: Fort Campbell Fish and Wildlife)

However big it is, this is just a phenomenal deer. 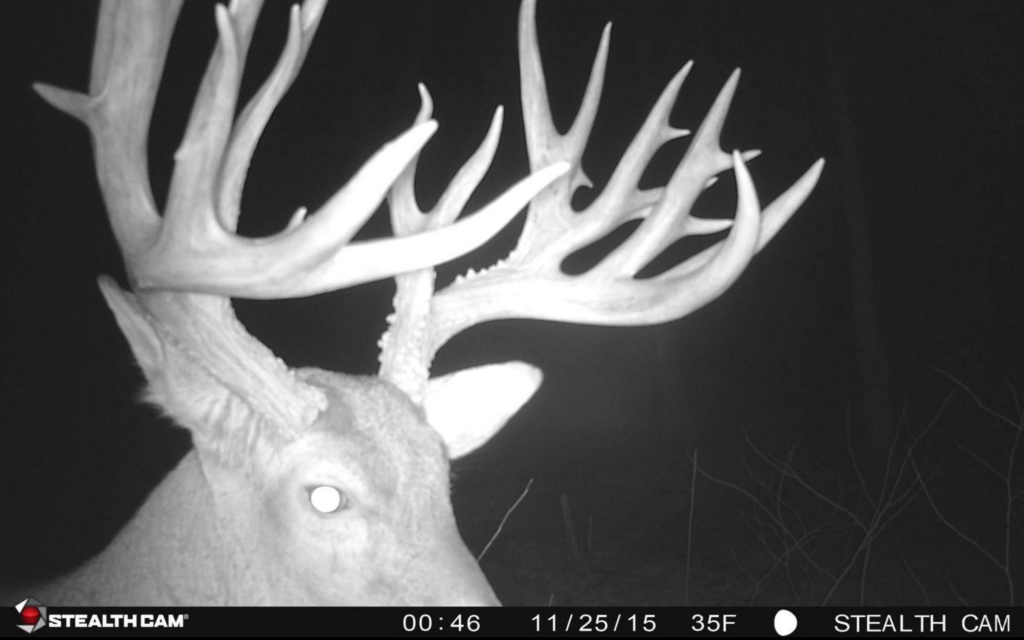 How many antler points can you count on this buck? Without doubt there are at least 20 if not 25 or more. (Photo: Fort Campbell Fish and Wildlife)

Social media already was lighting up with news of the giant buck’s demise. From the Fort Campbell Fish and Wildlife Facebook page:

Ryan Tolbert What a freaking slob, he’s a beast of a whitetail
Matt Epps The stuff dreams are made of…
Chuck Williamson What a shame
John Velasquez What a Shame …If I had seen that rack coming through the woods….I Would have picked up & Run for the ” Hills ” !!!!!
Nathan Tolbert To watch that deer get loaded in the back of the truck just made me sick. A monster like that should of went out a better way. To king of the woods there.
Keven Nielsen Incredible Buckaroo!!
David Benner Absolute monster. Rockstar. What a shame.
Patrick Hopkins Hunted Campbell for many years and loved the management of the deer there. There are more big bruisers there than most can imagine. Thanks for the trail cam pics. Sorry to see his genetics are now gone from the gene pool.
Kyle Merical Unfortunate. But it is a fact of life in Iowa. Glad his life was documented and hoped he spread plenty of love…
Shelton Warren Not the same buck my friends. Being in the whitetail industry/ world for many years if you look closely at all the pics the browtines are different as well as the droptines. Yes it’s plural. Whitetails carry that through first set an so on. Great pics though. Jason Warren look very very close and y’all will see that the racks are not the same. The pic of the velvet ( vehicle) buck has no drops and G2s are non similar.