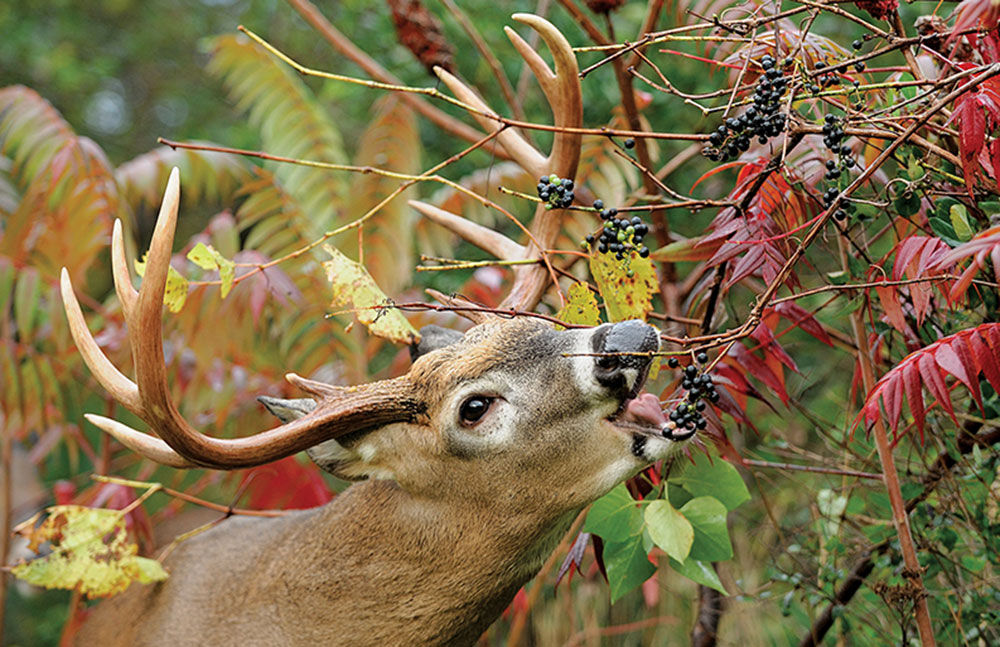 A lot of deer hunters are interested in managing their properties for good deer habitat. But Jim Ward of Iowa City, Iowa, is taking things way beyond just planting a food plot and hoping deer show up.

Ward, who runs Jim Ward’s Whitetail Academy, manipulates the landscape to create buck bedding areas, preferred trails and staging areas. These improvements create ideal buck habitat that not only provides bedding cover but also daytime food sources within cover, the benefits of which folks are just beginning to understand.

The key to Ward’s habitat management is a technique called hinge cutting, which is an extremely dangerous method of cutting trees. The idea is to fell a tree without cutting all the way through the cambium layer on the opposite side. When the tree falls, it will ideally stay alive and produce food at a level deer can reach, in addition to providing cover.

By creating these buck bedding areas, Ward can keep bucks on a hunter’s property and provide ambush sites to effectively hunt mature deer. Okay, let’s take a look at below tips on how to transform bedding areas, create deer ambush sites.

“The first thing I do when a client calls is to have them send me a map,” Ward said. “The topo map is the key to what I do. Most of the time, bucks want to bed high and feed low. The plants on low ground are more desirable and more nutritious because everything up on the high ground is dried out.” 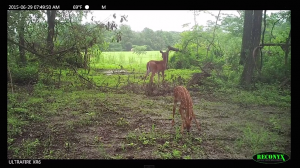 High ground can be a relative term. It might be on top of a bluff, or it might be only a 2-foot-high island in areas that are relatively flat.

“I’m going to put them (buck bedding areas) right where they are naturally,” Ward said. “I want the end of a point on a ridge, where the contour lines go from being wide to being narrow. It’s mainly because deer can smell better.”

Ward likes to cut about a half-acre bedding spot. Ideally, he will cut almost every tree in that area. He cuts what he calls “junk trees.” These are trees of low timber value, such as box elder. By removing them, he creates cover and food for deer. He also improves the timber value of more desirable species because those trees have less competition for nutrients after the junk trees are removed.

“I don’t want to ever grow timber in that half-acre,” he said. “I want it to be almost a clear-cut. The deer can go in there and eat browse in winter.

“The key is the diversity of plants and the amount of daylight I let in. Right now, you might have 15 to 20 plant species. If you open it up, you can get 75 plants in there. The diversity is the key to holding deer.” 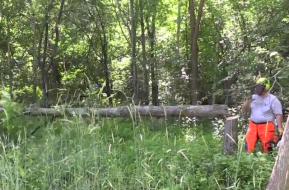 Cutting a tree five feet off the ground does a few things, Ward said. First, deer like to stand or bed under those trees because they provide good screening cover. It’s also easier for deer to walk under high-cut trees rather than going over trees that fall low and parallel to the ground.

Hinge-cutting those trees keeps them alive. Depending on the species, a hinge-cut tree might survive an average of three years, providing live, low-growing browse for deer. That browse is especially critical during winter because it gives deer access to food they normally couldn’t reach.

Cutting a tree at head height also provides a platform on which to fell other trees. Felling a hinge-cut tree on top of another tree improves the tree’s survivability. Ideally, Ward stacks the trees like dominoes, laying one upon the next. That helps them live longer and provides thick screening cover that mature bucks prefer.

Cutting a tree at head height is no easy task. It’s physically demanding, you have less control of the saw and you must deal with sawdust flying in your face. Standing on a sturdy, wide-based stool can help, but be aware this is a dangerous method best left to an expert.

How to Hinge-Cut a Tree

Hinge-cutting is extremely dangerous. Ideally, a professional forester or wildlife manager should do the work. Hinge-cutting works best on trees 2 to 8 inches in diameter. Larger-diameter trees don’t survive hinge-cutting very well and are more dangerous to work with.

Having a partner is a big help. On small trees, which are the best candidates for hinge-cutting, you can manipulate the tree’s fall through pushing or pulling.

Another trick is to use a grappling hook to help pull down the tree. Ward makes his hook by weld- ing pieces of re-bar together like a treble hook for fishing.

Some species work better for hinge cutting. Elm, hackberry, hickory, cedar and willows survive best when hinge-cut, and species such as popple, hickory and maples have low survivability.

After Ward has cleared a half- acre bedding area, he prepares the soil and seeds it with a shade-tolerant mix. Again, he strives to get a variety of plants growing because deer prefer various foods at different times. Even though the half- acre is more exposed to sunlight, plants must still deal with shade from surrounding standing timber and the hinge-cut trees. Ward likes a mix with rape, clover, chicory, orchard grass, red fescue, partridge pea, white Dutch clover and a variety of other species. 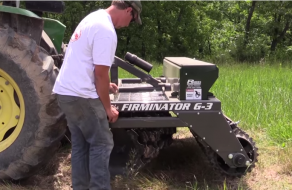 A leaf blower is essential for removing heavy detritus and getting seed established. However, Ward cautions hunters to take it easy and only blow off about three-quarters of the leaves.

“I blow off the heavy leaf debris, but you don’t want it to be completely bare because the deer will eat every little sprig that pops up, and the birds eat the seed,” he said.

When Ward is done with one of his enhanced bedding areas, it should provide thick cover and plenty of daytime food for deer. Ward said most hunters don’t realize how much deer feed during the day. Through personal observations and scouting camera photos obtained at his bedding areas, Ward has learned that deer are much more active during daylight than many hunters think. Deer, he said, don’t simply bed all day and feed at night.

With a bedding area in place, Ward embellishes an existing deer trail leading to a food plot.

“I want to make a deer trail from my bedding area to the feeding area,” he said. “This is going to be my deer trap.

“On my deer trail, I’m hinge-cutting trees at knee high. It encourages them to be on my trail. I’m hinge cutting trees to the left and right, perpendicular to my trail.” 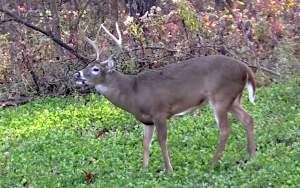 Lower hinge-cut trees along the deer trail create good screening cover so deer feel secure as they travel. It also makes it easier for deer to feed, too, because Ward seeds the trails in a similar manner to his bedding areas.

Ward also hinge-cuts a few trees at head height along the trail. Deer, he said, like to stand under those trees and scan for predators before they move on.

Other embellishments — such as mock scrapes, artificial licking branches and even water tanks — can make the trail even more desirable for bucks.

“I’m giving them everything they need along the trail,” Ward said.

About 50 to 75 yards before the trail exits thick cover and enters the food plot, Ward creates a stag- ing area. There, he again hinge-cuts trees in a 25- to 30-foot circle. That gives deer thick cover to mill around in before they enter the open food plot. And the staging area is where Ward plans to waylay a mature buck.

“I never hunt the food plot anymore,” he said. “That’s my sanctuary. The does want to bed close to the food plot for dominance on the food plot. I come in behind the does. By hunting the staging area, you don’t have to worry about the does winding you.”

Ward said another benefit of hinge-cutting in the staging area is that fallen trees block a deer’s view of the plot. Deer want to see into the plot so they know if the coast is clear. Obstructing their view gets them walking around during daylight, looking for a better vantage point in the staging area. That makes them vulnerable to hunters.

Occasionally, Ward will also hunt the bedding area during the October lull or about the time bucks start to rut heavily. However, to effectively do so without spooking deer, your scent control has to be perfect. Hunting the staging area is a much safer bet.

Managing your property through hinge-cutting is no simple task. Cutting a half-acre bedding area, which can encompass hundreds of trees, is physically demanding. Add in the idea of cutting them at head height, with no notch to control the tree’s fall, and it also becomes extremely dangerous. Hunters should consult a professional land manager or forester for help.

Guys who make a living cutting trees know plenty of tricks to get trees to fall the way they want, and they know how to manipulate an area into an ideal bedding site. Despite the effort and risk, overhaul- ing to existing bedding areas can drastically improve your hunting.