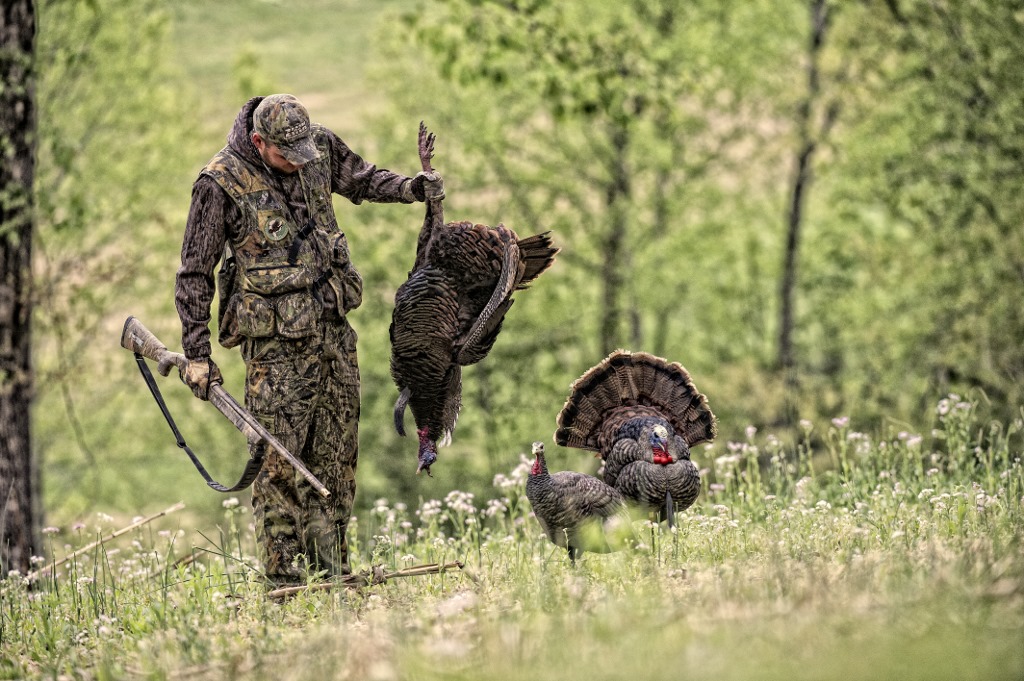 Pursuing turkeys is one of the most exciting forms of hunting. The birds are tough to hunt yet engaging. Hunters can be conversational with their quarry. While the conversations are exhilarating, the confrontations are what turkey hunters live for. The last 50 yards of enticing that big gobbler to your location can last for hours or end in a flash. It all depends on the individual bird and the situation. If getting started in turkey hunting is in your plans for this year, the following tips will help accelerate the learning curve.

If you know someone who has experience, ask them about the hunting in your area. Most hunters are more than happy to help someone get started. There is a good chance they will go with you if schedules align. Hunting with a partner allows a novice turkey hunter to focus on the surroundings while allowing their companion to do the calling for them. Having someone call from twenty yards behind the shooter will also help get turkeys closer for a lethal shot.

Get Up Before The Birds

Hunting turkeys in the middle of the day is possible. However, the vast majority of turkeys are tagged in the first hour of hunting. It’s imperative to be in your spot well before the sun rises. Even if you slip in to the woods just before legal shooting time, light sneaking over the horizon will likely be enough to expose your position to roosting birds. Turkey hunting isn’t a sport for people who like to sleep in.

If you have no experience calling turkeys, check out various recordings of turkey calls. This will help you get acquainted with what turkeys sound like. I recommend a box call to all new turkey hunters. They are the easiest to use of all the mainstream calls and they make sweet sounding turkey music. If you’re not to prideful, pick up a push button call. Veteran turkey hunters turn up their noses at them, but with a little chalk and some practice, they are more than adequate. Another great thing about push button calls is it only takes one hand to operate them. As far as when to call, less is more, especially when you have a gobbler in view.

When hunting whitetails, scent control is preached endlessly. Scent is not an issue for turkey hunters, but concealment is everything. Not only do you need to wear camoflage clothing, your hands and face also need to be covered. I like to wear ¾ face masks because they are easy to pull down if I need to make an adjustment. When it comes to gloves, be sure they have some grip. I’ve seen guys wear brown jersey gloves and have their guns slipping out of their hands. Not a good situation! Some hunters really like hunting out of ground blinds, but I feel they really limit your mobility. I have a few to use in specific situations, but your best bet is to buy a quality turkey vest with a nice seat and sit up against a tree.

You can hunt turkeys without decoys. But in my experience, success dramatically increases with the use of decoys. Early in the season a hen decoy with a jake or even a gobbler will create enough jealousy to bring a tom within range. Later in the year, go with a hen or two and leave the male decoys at home. Toward the end of the season, gobblers are beat up and tired of fighting for the right to mate. They may decide it’s too much work to fight your jake decoy for an opportunity with a hen. If you’ve got a few extra bucks, invest in a feather system for your decoy. Turkey Skinz is a popular brand that I’ve had success with. They take the fake sheen off a decoy(especially new ones) and really help sell the decoy to a gobbler.

If a flock of turkeys approaches you, pick out a bird a two before they get into range. Hens are off limits during spring seasons. They will be smaller, have duller plumage, and their heads will be more pale in color and less pronounced. Male turkeys will be larger and their heads will be bright red with accents of white and blue. They will also have beards. Juvenile males, known as jakes, have short beards that will stick out from their chest. The tail fan on a jake is also incomplete. The middle feathers stick out further than the feathers on the side. Mature gobblers will have full tail fans and long beards of eight to twelve inches. Some veteran hunters will pick out the gobbler with the biggest beard before shooting. I recommend shooting the gobbler that gives you the best shot opportunity. Any gobbler is a good gobbler, especially if it’s your first.

Youth and some women use 20 gauge shotguns for turkey hunting. However, the 12 gauge is the standard gobbler gun. If you have one chambered for 3 ½ inch shells, even better. For deadly patterns and plenty of knockdown power, go with 5 shot. Some hunters prefer 4 or 6, but 5 seems to be the happy medium. To create a vicious pattern, an extra full turkey choke is required. The Terror Choke is one of my favorites but there are several companies producing great chokes for turkey hunting. Some hunters swear by scopes while others swear at them. I’m in the latter category. I prefer shooting with open sights. Target acquisition is faster and it’s easier to see everything in front of you if an adjustment is needed. If you live in a state that allows rifle hunting, the .243 and .223 seem to be the gold standard for turkey rifles.

Unless you enjoy spitting pellets out at the dinner table, shotgun hunters should take head shots only. The maximum range for me is 45 yards and that’s a good number for a beginner as well. As a gobbler struts into range, wait for him to pop his head up. Some hunters will give the bird a cluck or two to cause him to bring his head up. But if you’re hunting by yourself and can’t move, just wait for them to do it on their own. Gobblers usually attempt to dominate the decoy and stick his head up when gobbling or strutting. That’s a great time to squeeze the trigger and pound your bird!

A well placed shot within range should drop a turkey immediately. If they start to run off, I recommend an immediate follow up shot. You don’t want to let that bird get out of sight. After the bird hits the ground, you will want to tag him immediately before moving him. Don’t forget to snap some quality photos. That big gobbler looks a lot nicer in the woods or in the field than he will in a garage or in the back of a truck. Stuff a piece of blaze orange in your vest before heading back to the cabin or truck. A baseball cap or pair of gloves works great. They will allow you to walk out of the woods while carrying your turkey in a safe manner.

If you’ve never hunted turkeys before, there has never been a better time to get started. In most states, bird populations are high, seasons are long, and tags are easy to get. Once you’ve witnessed a big tom gobbling his head off while staring down your decoys, you’ll never miss a season again.