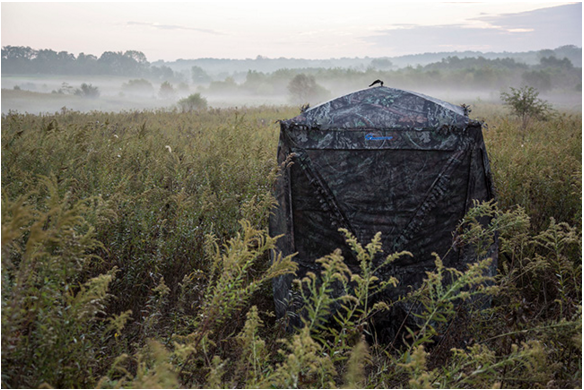 As we all known, weather is one of those uncontrollable variables that can really influence the outcome of your hunt. When peak rut hits, deer hunters want to be in the woods all day. However, steady rain and temperatures in the high 30s make that already daunting task seem nearly unbearable. The best you can do is use the Marine Corps motto of improvise, adapt and overcome.

That’s what I did. Nestled in the comfort of a hard-shell blind, I was actually relishing prime conditions for all-day buck movement, which was a good thing, because it took all day for the right buck to appear.

Deer moved throughout the day, but with the end rapidly approaching, only one got my heart pounding. He was not a giant but a very tempting 3-year-old 8-pointer — one of those “last-day” bucks. But it was the first day, and it took all the self control I could muster to dismiss the deer hunter’s mantra: “Never pass up a buck on the first day that you would shoot on the last.” The situation got more tense when, with only minutes of daylight left, the buck suddenly got edgy and appeared ready to bolt.

“No,” I told myself again. “You want something bigger.”

The thought had barely passed when my wish was granted. The source of the 8-pointer’s anxiety was a much bigger buck. And with his attention firmly riveted on the younger rival, the big bruiser strolled confidently into the green field and eventually into the path of my arrow.

Like the weather, your choice of weapon can influence how you hunt. Because they have greater effective range, gun-hunters have more options. They can still-hunt, spot and stalk, climb a stand or sit in relatively open ground. A few bowhunters go it on foot, but most opt for a stationary position, whether elevated or at ground level. In the latter case, concealment becomes more of an issue and ground blinds are almost a necessity. The advantages they offer apply off the ground, too, whether you shoot a vertical or horizontal bow.

Let’s look at some of those advantages of crossbow hunting from an enclosed blind and then talk strategy.

The most obvious advantage of hunting from a blind is concealment. Inside a blind, you’re almost invisible to the outside world. That means you can get away with more movement. Depending on the type of blind you’re using (more on that in a bit) you can even reduce your scent trail, sometimes significantly. Subtle noises such as shifting in your seat will be further subdued.

Another advantage you might not consider is your gear. Climbing into and sitting in an open tree stand limits what you take and how effectively you can use it. Everything must be close yet out of the way. The inside of my ground blind often looks like a miniature yard sale. I’ll bring along all kinds of stuff I would never consider when stand-hunting and spread it around on the floor and shelves. Inside the blind, I’m not strapped down with binoculars, a range-finder, grunt tubes and fall-arrest system. I just pick them up and put them down as needed, with little concern for noise or movement.

Yet another big advantage is one already I alluded to: comfort. Snug inside the confines of a hard-sided blind, you can withstand more severe conditions more comfortably. Even a pop-up blind will break the wind and keep you out of the rain and snow. Instead of a sliver of slightly padded plywood, you can rest easy in a comfortable chair with arm and back rests.

Looking for more advantages? Where there’s a thick canopy, you can see farther at ground level than from a tree stand. Hunting at eye level also gives you a larger kill zone, and you don’t have to worry about compensating for steep downward angles. Blinds offer an ambush option that might not otherwise exist if there are no trees sufficient for a tree stand. Last but not least, they’re safe. You still need to be careful climbing up and down the ladder to an elevated blind, but you’ll never fall out of a ground blind.

Blinds can be divided into two general categories: collapsible and fixed or hard-sided, each of which has ample options. Collapsible blinds include hoop and hub-style, and run the gamut in terms of dimensions and window configurations.

Hard-sided blinds come in a variety of shapes, sizes and colors. Some are round, others square. Some are camo, others black or of one color. Some are textured to mimic trees, and others are little more than converted port-a-potties. Shop around and see which best suits your style or specific application.

Now that you know the what, it’s time for more on the how, which can vary depending on the prey you pursue.

Deer probably require the most care and effort when it comes to blind placement. As noted, you have far more flexibility where you can put a blind because you don’t have to hunt for the right tree. However, you still have to be smart about it. It’s a good idea to make your blind blend in as much as possible by using or adding cover. You also need to put your blinds in place well before your hunt, because deer are much more suspicious of foreign objects in their environment.

It takes time, but deer will eventually get used to a blind, especially if it’s near a food source such as a food plot. In fact, this is where hard-sided blinds really shine. You can put them alongside a food plot before you hunt — even before you plant — and leave them there indefinitely. Eventually, they become part of the landscape. 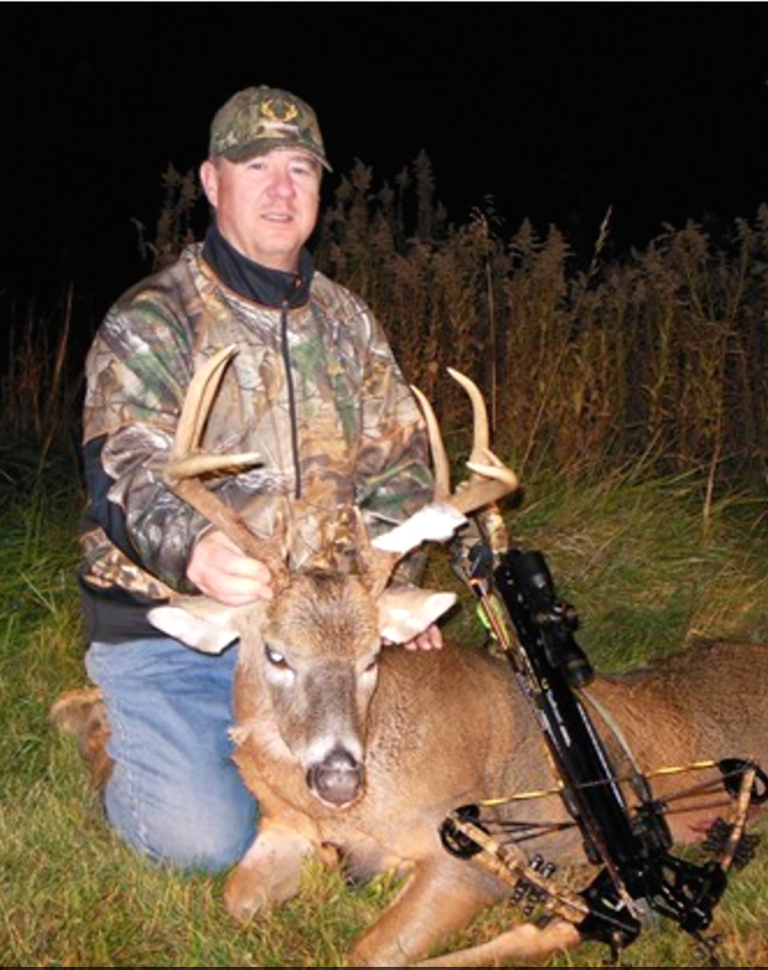 I recently attended an Ohio crossbow hunt where the landowner placed Banks blinds on his food plots weeks before our arrival. Several hunters remarked that the deer paid the blinds no mind, and in some instances walked by and even fed within a few feet of them.

Somewhat the same is true for other species, such as antelope and elk. I witnessed an example of the former at a Montana hunt where the outfitter failed to erect blinds at the waterholes until the day we arrived. For two days, all the hunters saw the same thing: antelope would approach, stop at about 100 yards and stare at the blind for several minutes before wandering off to another water hole. The same holds for setting up by an elk wallow.

A friend who guides bear hunts in Maine uses ground blinds almost exclusively at his bear baits. In fact, he’s killed deer, bear, moose and turkeys from his ground blinds and claims bears all but ignore a ground blind after they’ve become accustomed to it.

“It’s really exciting to have a mature bear less than 2 feet from you,” he said. “You can hear them breathing as they sniff the blind material. Then, when they move off, they trip over one of the tie downs and have to squeeze between the blind and a big tree making the blind rock wildly. Man, what a rush.”

He doesn’t brush in his blinds but sets them well in advance and soaks them with scent-killing sprays.

Pop-up blinds are usually a better option for turkey hunters for several reasons, not the least of which are portability and flexibility. A bowhunter doesn’t have nearly the flexibility of a gun-hunter, who can plop down against almost any tree with reasonable chances for concealment. That’s particularly true for a vertical-bow hunter, who must draw bow when the keenest eyes in nature are close. A crossbow hunter doesn’t have that disadvantage, which provides slightly more flexibility in your choice of blinds — even down to a something like a three-panel packable blind. Still, the close range required for a shot increases the chances of being picked out and still calls for additional concealment.

Using a blind, turkey hunters have a decided advantage over deer hunters. You can show up the morning of your hunt, pop your blind up in the dark and be ready to hunt when the sun rises. And if the birds don’t cooperate, you can pick up and move to a new location. Turkeys aren’t nearly as bothered by the sight of new objects in their domain. In fact, they can sometimes even seem curious about an odd new structure. And though it doesn’t hurt, trying to conceal or brush-in your blind isn’t necessary. You can pop it up in the middle of an open field, which can be especially effective on troublesome field birds.

Specific strategies usually come down to particular circumstances. Each is different, and you’re limited only by your own imagination and ingenuity. There are, however, a few general tips that apply to most situations.

—Dress in black: You’ll blend in better with the blind’s dark interior than if you’re wearing camo.

—Keep the windows closed: This applies mostly to hard-sided blinds. It helps conceal you and contains your scent and noise.

—Don’t silhouette yourself: If the blind has multiple windows, only open what’s necessary.

Hunting from blinds is not without disadvantages. You don’t have quite the mobility of a hunter on foot or even with a climbing stand.

However, if you’ve done your homework, you definitely have an advantage than if you were hunting from a fixed stand. And sure, you can’t see or hear as well in a blind, but neither can your quarry. You just have to be more alert. Cost can also be an issue, particularly with hard-sided blinds. But if you take care of them they’ll last a long time. In the end, the positives far outweigh the negatives.